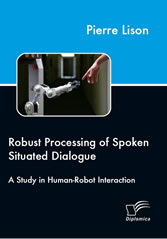 "Recent years have witnessed a surge of interest for service robots endowed with communicative abilities. Such robots could take care of routine tasks, in homes, offices, schools or hospitals, help disabled or mentally impaired persons, serve as social companions for the elderly, or simply entertain us. They would assist us in our daily life activities. These robots are, by definition, meant to be deployed in social environments, and their capacity to interact naturally with humans is thus a crucial factor. The development of such ""talking robots"" led to the emergence of a new research field, Human-Robot Interaction (HRI), which draws from a wide range of scientific disciplines such as artificial intelligence, robotics, linguistics and cognitive science. This work focuses on the issue of robust speech understanding - that is, how to process spoken dialogue automatically to extract the intended meaning. The book presents a new approach which combines linguistic resources with statistical techniques and context-sensitive interpretation to achieve both deep and robust spoken dialogue comprehension. The first part of the book provides a general introduction to the field of human-robot interaction and details the major linguistic properties of spoken dialogue, as well as some grammatical formalisms used to analyse them. The second part describes the approach itself, devoting one chapter to context-sensitive speech recognition for HRI, and one chapter to the robust parsing of spoken inputs via grammar relaxation and statistical parse selection. All the algorithms presented are fully implemented, and integrated as part of a distributed cognitive architecture for autonomous robots. A complete evaluation of our approach using Wizard-of-Oz experiments is also provided in this book. The results demonstrate very significant improvements in accuracy and robustness compared to the baseline."