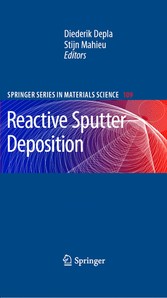 
In this valuable work, all aspects of the reactive magnetron sputtering process, from the discharge up to the resulting thin film growth, are described in detail, allowing the reader to understand the complete process. Hence, this book gives necessary information for those who want to start with reactive magnetron sputtering, understand and investigate the technique, control their sputtering process and tune their existing process, obtaining the desired thin films.


Prof. Dr. D. Depla has received his Master Degree in Chemistry in 1991 at Ghent University (Belgium). In 1996 he promoted with a PhD thesis on Solid State Chemistry. After a short period as senior scientist in the Department for Solid State Sciences, he became in 1999 Professor at the Department for Solid State Sciences where his research focussed on the fundamental aspects of reactive magnetron sputtering. He has shown the importance of ion implantation in the description of the reactive magnetron sputter process. In this way, his continuous research in this area resulted in several publications.
Dr. S. Mahieu received his Master Degree in Physics in 2002 and promoted in 2006 with the PhD thesis entitled 'Biaxial alignment in sputter deposited thin films' in the department of Solid State Sciences, Ghent University (Belgium). During his PhD, he focussed on the modelling of thin film growth, plasma characterization and the simulation of transport of sputtered particles, resulting in the elaboration of a new structure zone model as published in an invited review in Thin Solid Films. As Postdoctoral Fellow of the Research Foundation - Flanders (FWO), his current research is focussed on characterizing and modelling the relation between thin film growth and the energy flux towards the substrate during magnetron sputtering.