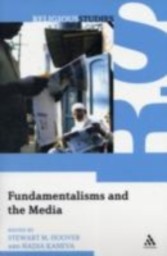 Fundamentalisms and the Media

Fundamentalisms and the Media

The turn of the twenty-first century has seen an ever-increasing profile for religion, contrary to long-standing predictions of its decline. Instead, theWest has experienced what some call a ‘realignment’ of religion where it persists in conjunction with other institutions and structures. Outside the West, religion is an ever more prominent force in social and political movements of both reform and retrenchment. Across these contexts, no issue in religion is of as much concern as fundamentalism – or rather the fundamentalisms within various traditions – which are seen to be fomenting religious, social, ethnic, and political tension and conflict. The contributions to this volume represent the first effort to look at ‘fundamentalisms’ and ‘the media’ together and address the resulting relations and interactions from critical perspectives of history, technology, geography, and practice. The result lays important groundwork for scholarship on these new and increasingly important phenomena.