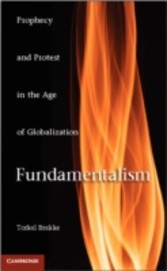 This book investigates the origins of fundamentalism, outlining its characteristics and the history of key fundamentalist movements around the world, considering examples from Christianity, Islam, Buddhism and Hinduism. The book argues that fundamentalism develops when modern lay religious leaders challenge the authority of secular states and traditional religious establishments. These new leaders and their followers seek to infuse religious values and practices into all spheres, especially law, politics, education and science. The patterns of religious authority and leadership that characterize fundamentalism have their roots in a Christian context but were globalized through intense intercultural contacts after the mid-nineteenth century. Fundamentalism is a thoroughly modern and global phenomenon because it presupposes the globalization of ideas and practices concerning religious leadership and organization, as well as universal changes in the relationship of religion to modern societies and states.