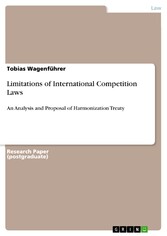 Research Paper (postgraduate) from the year 2010 in the subject Law - European and International Law, Intellectual Properties, grade: A, Queen's University, language: English, abstract: This paper uses a blend of empirical literature and real-life examples of merger approvals and rejections to derive limits of international Competition Laws (CL). I separate the detected problems in generic weaknesses that relate to the nature of CL itself from derivative weaknesses that harken back to shady regulation and disharmonies across the globe. Generic weaknesses encompass an unclear balance of power between Intellection Property (IP) Law and CL, the CL's potentially slowing effect on innovation, the economically muddled rationale behind the law and the distortion of its enforcement due to the law's historical evolution and differences in cultural values. Derivative weaknesses are mainly based on the creation of misleading incentives derived from conflicting CLs and their enforcement across the globe. The establishment of an international harmonization treaty could be discussed in one of the upcoming WTO rounds to reach an agreement about the mutually beneficial maximization of global welfare.