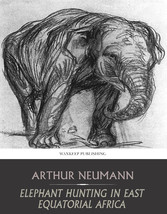 AFRICA IS A BIG country. Few people who have no personal acquaintance with more than one portion of the continent realize how big. Thus in South Africa anything outside of the various colonies and states that make up what is commonly included under that designation used to be “somewhere up about the Zambesi,” though it might be a thousand more miles beyond. Just so now the average idea of Central Africa held in this country is expressed in the query “anywhere near Buluwayo?” I would therefore ask you to kindly glance at a map of Africa and notice what a long way Mombasa is from Cape Town, and how far the equator is north of even the Zambesi.

Though Durban is now the handsomest and most up-to-date seaport town in South Africa, when I first landed there early in 1869 it was a comparatively primitive place. Nevertheless I always felt that I had come too late, and listened with envy to the tales of those who were then old colonists about elephants in the Berea bush when they first were “Jimmies” or newcomers. The elephants had been driven far beyond the borders of the colony by the time my foot first sank into the deep sand which served for the streets then, and I never overtook them in South Africa. The last buffalo even Natal contained was killed a year or two after my arrival. Not but what I did find my way, during the many years I wandered in South-Eastern Africa to where the latter were still in possession—big herds of them; and other game, of every kind peculiar to the country with the one notable exception above mentioned, yet swarmed. Some of those old days might be worth recalling at another time; but they never satisfied me thoroughly. I hankered after the untouched wilds which I knew still existed in Equatorial Africa: where the elephant yet roamed as in primeval times; where one would never see the wheel-mark of a Boer’s wagon nor hear the report any gun but one’s own.

But circumstances—largely connected with a certain emptiness of the pocket—kept me back for something like twenty years from attempting to penetrate into the interior of the continent from another and more favorably situated point. Even when in 1888 when I made my first passing acquaintance with Mombasa (before the days of the Imperial British East Africa Company), as well as other African ports, in the course of a voyage up the east coast, I was deterred by the heavy coast which such an expedition as was said to be necessary to enable one to go any distance inland would entail. Two year later I was there (Mombasa) again; but still the difficulties in the way of making an independent trip after elephants, and the lack of encouragement to undertake it in any other way led me to take service under the East Africa Company for a time, that I might learn something of the country and gain a knowledge of the management of a caravan and a smattering of the Swahili language. Of a little more than a year which I spent thus—first cutting a bush road up the Sabaki River and afterwards joining in an expedition to the interior—it is not my intention to write now, though there may be something worth telling about the latter someday. I had also the opportunity of finding out during that trip that elephants were not more difficult to kill than other game, and resolved to devote myself to their pursuit. Then the offer of an appointment in Zluland took me south again, but only to find after a year that the monotony of the life was unsuited to me. So I reverted to my original plan.

Mombasa had always a great attraction for me. A sleepy, old-world place, with its narrow streets and listless, picturesque inhabitants, it was suggestive of primitive times. If, one thought, the very port is so remote and untouched by modern progressive influences, what mysteries enticing to the imagination may not the interior contain? This, surely, was the very country I had yearned for. The island had, moreover, beauties of its own, though these it is not my province ot describe, such as a picturesque and interesting old fort, a fine harbor, and dreamy shady mango groves run wild producing luscious fruit nearly all the year round. I always enjoyed the time I was detained there. The prospect over the still water in the cool of early twilight or by moonlight was particularly soothing, with the quaint dhows at anchor and fishing canoes paddling in and out or gliding before the soft breeze, a loin-cloth hoisted between two upright wattle serving for sail. The island too was then unspoilt. Such toy tramways as had been laid down were for the most part overgrown with grass and tropical vegetation; overtured dolls’ trucks, rotting in the jungle, but emphasized the supremacy of nature. Now, alas! The place is all railways, iron roofs, and regulations, a change decidedly not for the better from my point for view. Let those who like them describe such “improvements.”

I make these preliminary observations mainly with a view to showing that I had had considerable African experience all of which was directly or indirectly of the greatest use to describe. I had shot much big game in South-Eastern Africa; had travelled many thousand miles, albeit with different means of transport and had acquired such bush and veldt knowledge as only a long apprenticeship can give—knowledge of the greatest value not only to hlelp one over difficulties but to enable one to understand the varying conditions with which one may be surrounded.

So that I was no novice when, in the end of November 1893, I landed once more in Mombasa, this time prepared to at last carry out my long-cherished scheme for making an independent expedition with my own caravan into the interior, the main object of which should be elephant-hunting. I hoped by this means to recoup myself through the ivory for the outlay incurred in following my bent wandering in the most remote wilds I could reach. My weapons were a double .577 (which I had already once had the opportunity of testing on elephants, with good results), a single .450—both of these by Gibbs,—a .250 rifle, and a shotgun. This last is afterwards discarded as unnecessary, while tis cartridges were an encumbrance. To these I added a common Martini-Henry.

I know by experience that the routine of organizing and fitting out an expedition, starting it from the coast, and even the first part for the journey itself make uninteresting reading, and anything that I may think worth mentioning on these subjects I can more conveniently allude to elsewhere; I will, therefore, not worry my readers with tedious preliminaries of the kinds now, beyond saying hat in one month I was ready with about fifty men (all of whom I armed with Snider carbines) and some twenty donkeys to start for the “bara” or interior, with the intention of getting as far as I could and being away as long as I liked. That way, I consider, a short time to take in all the preparations work done, and I had brought nothing but my guns and cartridges with me; but porters were plentiful, and I was known to them, not unfavorable—my very Swahili name, “Nyama Yagu” (my meat or my game), being suggestive of good times. My headman was not altogether a happy selection. He was a most polite, polished, and picturesque Swahili gentleman of Arab descent, but not very practical. Plucky, he was, as I afterwards found, but somewhat procrastinating and over punctilious about strict Mahomedan observances to be altogether suitable to the rough-and-ready life we had to lead. Owing partly to this not too suitable appointment, some undesirable men got “written on” as porters. There are abuses in the manner of engaging these men; and if not very carefully looked after, the wily rupee plays an important but discriminating part in their choice quite unconnected with any useful qualifications. The result became apparent pretty soon, but not, fortunately, on any very serious scale.

Our start, two days before Christmas, was most smooth and propitious. The men all turned up, and never was there a happier and more enthusiastic a lot of porters nor, for the most part, a finer. Two or three desertions took place a day or two after, causing a little, temporary inconvenience, and one gentleman took the belt containing my watch with him, which had been hung on a bush behind me while I was seeing the caravan off in the dusk. But strange to say-whether because his conscience pricked him or that he could not sell what it was so apparent he must have stolen—he came back of his own accord, watch and all, a few days later. I forgave him, and he was a faithful and reliable for the rest of the trip.

Having had long experience of both ways of travelling, I prefer on the whole the Central African system of a caravan of porters for a hunting trip to the ox-wagons of South Africa. Of course the latter means of transport have many advantages and the others their drawbacks, and probably many people would disagree with my conclusion. But with the “safari” one is more mobile, independent of roads, and never has those terrible “stickfasts”—so upsetting to plans and tempers—to which wagons are liable.

I have no intention of inflicting upon the reader a description of the wearisome details of caravan travelling. It is less monotonous to go through than to read about. The exercise keeps you in good health, as a rule, and there is always something to be done which prevents the afternoons hanging heavily upon your hands; while the constant change, even from one disagreeable camp to another, makes a variety of a kind—never so tedious as stagnation. One soon...