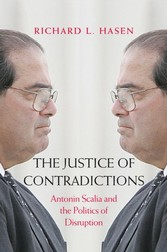 Justice of Contradictions - Antonin Scalia and the Politics of Disruption

Justice of Contradictions - Antonin Scalia and the Politics of Disruption

Engaging but caustic and openly ideological, Antonin Scalia was among the most influential justices ever to serve on the United States Supreme Court. In this fascinating new book, legal scholar Richard L. Hasen assesses Scalia's complex legacy as a conservative legal thinker and disruptive public intellectual. The left saw Scalia as an unscrupulous foe who amplified his judicial role with scathing dissents and outrageous public comments. The right viewed him as a rare principled justice committed to neutral tools of constitutional and statutory interpretation. Hasen provides a more nuanced perspective, demonstrating how Scalia was crucial to reshaping jurisprudence on issues from abortion to gun rights to separation of powers. A jumble of contradictions, Scalia promised neutral tools to legitimize the Supreme Court, but his jurisprudence and confrontational style moved the Court to the right, alienated potential allies, and helped to delegitimize the institution he was trying to save.