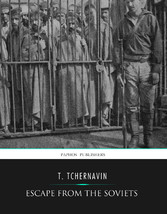 Escape from the Soviets

Escape from the Soviets

THE WINTER PASSED. FAMINE WAS growing worse. Constant underfeeding and the impossibility of getting food created a curious sense of weakness and indifference. It was hard to say whether one had had dinner because we never had enough to eat. The dinner which we had to fetch from a “communal kitchen” consisted of watery soup with millet in it and an occasional piece of rusty salted fish. It was so nauseating that had it been possible I would have stopped eating altogether.

In the spring the two senior forms in the commercial school where I taught were drafted into the Red Army. I was left almost without work, because I was no good at teaching small children. And in the autumn of 1919 it was proposed to reform all schools in a way which seemed to me entirely mistaken and which has not to this day led to any good or stable results. I loved teaching and was sorry to give it up after nine years of it.

For the summer we moved to Pavlovsk where there was a section of the Agronomical Institute that provided our baby with milk. My husband had to work for it during the long vacation, too.

Pavlovsk is a wonderful place. Petersburg is surrounded by marshy, neglected fields, poor kitchen gardens and patches of bright-yellow wild mustard; but here and there scattered like oases in the wilderness there are magnificent parks of the Imperial residences. It was one of the peculiarities of the old Russian life that in the times of serfdom the Tsars and the nobility created for themselves with the aid of foreign craftsmen places of fairy-like beauty that had nothing in common with the primitive surroundings in which the mass of the people lived. Thus, in Pavlovsk, a gifted English architect, Cameron, built a palace in the classical style.

The park looked fresh and lovely, and coming to Pavlovsk from the deserted capital, where we often recalled the sinister prophecy that “Petersburg shall be left empty”, we felt as though we had gone back a hundred years. It did not seem surprising to find in the glades instead of monuments to Marx and Lenin allegorical statues of Peace and Justice.

We had to live in the students’ hostel in the so-called “Constantine’s Palace”. I must say, it was not much of a palace. The Emperor Paul I, who was always in a hurry, commanded that two palaces for the grand-dukes Alexander and Constantine should be built at Pavlovsk within something like a fortnight, A clever and resourceful architect, Brenna, brought some buildings from Tsarskoe, added a cupola, arranged a hall with a double row of windows, painted some winged griffons on the cornices and all was ready. Alexander’s Palace has not been preserved, but Constantine’s stands till now, looking like a tumble-down old barn.

Our room, like the rest of the palace, was almost in ruins: the marble fireplace had been taken out, loose bricks were showing; the wall-paper with pink Chinese ladies and yellow pavilions was faded; the silk awning over the window was in tatters. There was no furniture except a deal table and a chair. We brought with us camp beds and a perambulator.

The students’ dormitories were upstairs, and the ground floor halls were called “laboratories”: they were furnished with seats and tables roughly made of planks. In the big hall with double windows there was a piano taken from a house next door. The corner room was converted into a kitchen. Twice a day three huge cauldrons were boiling in it: one with soup made of vegetables from the Institute’s kitchen-garden—in the early summer it was chiefly sorrel and beetroot-tops; another with rye or wheat porridge, and a third with so-called coffee, i.e., drink made with baked oats. We ate and drank all this out of magnificent Sevres china with the Imperial coat-of-arms and a design of a winding ribbon on which was written the motto “Follow a straight path”. Little was left of this service by the autumn.

The Imperial china, the old palace that had seen better days, and the young crowd of students some of whom asked quite seriously, “Comrade-professor, is a frog a unicellular or a multi-cellular organism?” somehow made the Revolution seem very real. The students worked in the fields, attended lectures, looked after the cows, and lived in the conviction that the future belonged to them. Sometimes it was very jolly to be with them, but often it was extremely unpleasant. For instance, after a long evening in the big hall when I had played the piano for them for hours, they would argue in the kitchen that there was no occasion to feed the professor’s wife, for she was not really entitled to a ration. It was purely theoretical argument because there was enough food to go round; it showed, however, that some of them regarded us not as human beings like themselves, but as “bourgeois” who may be utilized, but are not worth feeding.

But this did not worry me. In the long summer days, alone with my baby, I had other things to think about.

There had been a great change in him. His body was plump and firm, with delicious dimples all over, and he was strong and heavy. He showed great determination to get out of his pram, even if it were head downwards; he moved about vigorously, though chiefly on all-fours; he was keenly interested in everything that came his way—a stray leaf, a beetle, a blade of grass—and immediately stuffed it in his mouth. To extricate it was no easy matter and meant long and loud protests on his part. The few moments of peace I used to enjoy while he was having his bottle were no longer a rest, because now he needed careful watching: he tried to bite through the rubber teat if the milk did not come fast enough, or to throw the bottle out of the pram—and it would have been almost impossible to buy a new teat or bottle.

I fully grasped in those days what a blessing it would be to have a nurse, but that was out of the question, because we had no food to give her. With the greatest difficulty, at the price of my dinner and my daily ration of bread, I persuaded at last an old woman from the alms-house to come for a few hours a day, so that I might take on work at the Palace Museum.

This was the beginning of new work, which did not end till the day of my arrest.

To understand what it meant to work in a museum in U.S.S.R. it must be remembered that on the one hand, the museums were so rich in art treasures and so interesting that it was impossible not to be enthusiastic about the wealth of new material and new avenues of work opening before one at every step; on the other hand, the Soviet Government, though apparently anxious to preserve them, was really their chief enemy. It was ready at any moment to give away or sell everything they contained and to imprison or exile the curators for the least attempt to resist this. Needless to say, we were overwhelmed with work. Four or five of us in charge of the Palace Museum had to sort out the enormous quantity of art treasures that fell into our hands, to look after the upkeep of the place, to organize lectures and study-groups—and to do all this under appalling conditions, suffering from cold and hunger. Repairs had to be done but the simplest materials were lacking and workmen were hard to find.

I remember the first job I had to do. I was put in charge of the archives of the Pavlovsk Palace Museum. “Mind you don’t take alarm and desert us tomorrow,” the curator warned me, as he led me to the archives section.

Five big rooms were blocked up with bundles of old papers more than three feet deep.

“We had to bring these papers in a hurry from a building which the town has taken over. The Soviet officials were going to burn them. There are some more left, but those are in the old fortress tower which is not wanted, so they are comparatively safe there.”

In that tower the archives were piled up in huge heaps like snowdrifts in winter. The windows with broken panes were boarded up. Snow and rain could freely come in between the gaps in the boards.

If I had any instinct of self-preservation I should certainly have fled; but I remained. I carried the archives from the tower to the Palace, dried them, sorted them out, working in incredible dust, cold and damp. I could never have forgiven myself had I left all this to be simply destroyed. In a revolution everyone must bear full responsibility for his actions; everything has to rest on personal courage and initiative, until a new political organization can take charge of the country. This was what I and all my fellow-workers believed.

For three years I toiled among the piles of papers and did not leave my job until all the records from 1777, the year when Pavlovsk was founded, to 1917, the year of the Revolution, were safely lodged in bookcases, numbered and sorted out in chronological order, ready for the future historian. It was only in Pavlovsk and in Gatchina that the whole of the palace archives were saved; in Tsarskoe Selo and Peterhof the Communist commissars used almost all of them for paper.

In sorting out the archives we discovered every day new names of artists, craftsmen, merchants, new data about the buildings, about planning the park, about the fetes, the life of the times, the conditions of labor. A vivid picture of old Russia was rising before us.

Hungry and in rags, we fancied that we were doing great, important work in our Pavlovsk seclusion. Though it was only some twenty miles from Petersburg, the train journey took four to five hours, and during the three years I was there not a...