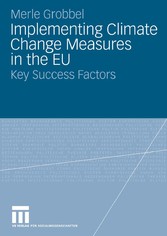 What changed in the United States with Hurricane Katrina was a feeling that we have entered a period of consequences. - Al Gore On February 05, 2007, the Intergovernmental Panel on Climate Change (IPCC) published the executive summary of its fourth assessment report (to be published April 06, 2007). In the summary, it not only acknowledged that climate change is happening at an accelerated rate, but also that its consequences would be dreary: changes in precipitation and in wind patterns, a rise of the sea levels, and desert- cation will globally impact the frequency of disasters and impair living standards. Whether or not we believe climate change is happening, over the past two years, we have witnessed a rise of the topic from oblivion to ubiquity and have experienced a growing emphasis on ?nding measures to prevent climate change. There is an unprecedented agreement among environmentalists, politicians, the public, and industry that we have to take effective action. Politicians are putting their creative plans to action unusually fast: Australia bans the light bulb, B- gium switches off lamps along lighted highways, and the US introduces daylight savings time two weeks earlier than in previous years. Industry, the most unlikely candidate for support, is rallying together in action groups like US-Cap or 2 Grad, and more and more consumers are offsetting their emissions through websites like myclimate.

Merle Grobbel holds a PhD in Political Science (Public Policy) and works as a consultant for McKinsey & Company.