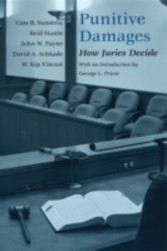 Over the past two decades, the United States has seen a dramatic increase in the number and magnitude of punitive damages verdicts rendered by juries in civil trials. Probably the most extraordinary example is the July 2000 award of $144.8 billion in the Florida class action lawsuit brought against cigarette manufacturers. Or consider two recent verdicts against the auto manufacturer BMW in Alabama. In identical cases, argued in the same court before the same judge, one jury awarded $4 million in punitive damages, while the other awarded no punitive damages at all. In cases involving accidents, civil rights, and the environment, multimillion-dollar punitive awards have been a subject of intense controversy.But how do juries actually make decisions about punitive damages? To find out, the authors-experts in psychology, economics, and the law-present the results of controlled experiments with more than 600 mock juries involving the responses of more than 8,000 jury-eligible citizens. Although juries tended to agree in their moral judgments about the defendant's conduct, they rendered erratic and unpredictable dollar awards. The experiments also showed that instead of moderating juror verdicts, the process of jury deliberation produced a striking ",severity shift", toward ever-higher awards. Jurors also tended to ignore instructions from the judges, were influenced by whatever amount the plaintiff happened to request, showed ",hindsight bias,", believing that what happened should have been foreseen, and penalized corporations that had based their decisions on careful cost-benefit analyses. While judges made many of the same errors, they performed better in some areas, suggesting that judges (or other specialists) may be better equipped than juries to decide punitive damages.Using a wealth of new experimental data, and offering a host of provocative findings, this book documents a wide range of systematic biases in jury behavior. It will be indispensable for anyone interested not only in punitive damages, but also jury behavior, psychology, and how people think about punishment.