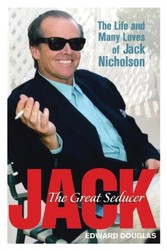 Jack - A Biography of Jack Nicholson

Jack - A Biography of Jack Nicholson

Jack Nicholson is one of the longest-lasting and most recognized sex symbols of our time. This sizzling biography goes deep in-depth, relating exclusive interviews with past flames and flings, to shed light on the unique charisma and magnetism of one of America's most respected and desired movie stars.Among the startling revelations:A longtime girlfriend who describes Jack's reaction when he at last discovered the long-buried, dark secret of his childhoodJack's notorious penny-pinching, such as the time he came home from a movie set with a doggie bag of catered Mexican foodThe woman Jack "shared" with Robert Evans and Warren BeattyThe night Christina Onassis, who'd had a fling with Jack in Los Angeles, got mad at him for seducing a girl in her party at XenonThe beauty queen who was still married to drug dealer Tom Sullivan when she was drawn to JackThe beautiful, talented costar who showed up at Jack's house at 1 A.M. and what happened when live-in girlfriend Anjelica Huston answered the intercomThe night Steve Rubell ran around Studio 54 saying, "We got to keep Ryan O'Neal and Jack Nicholson away from each other. There's going to be a big fight."Why Rebecca Broussard refused him when Jack asked for her hand in marriage in 1993, even after having two children with himWhy Katharine Hepburn's goddaughter still loves Jack and has spent years looking for a man who can measure up to himDiane Keaton's reaction to Jack passing gas during filming of a love scene for Something's Gotta GiveJennifer Howard, who found Jack's lovemaking "very oomph! He knows what he's doing. You can kind of just let go. Let him le-e-e-ad the way!"In Jack, Edward Douglas offers us a provocative, fascinating portrait of the man, the legend, the star: Jack Nicholson.