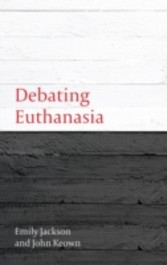 In this new addition to the 'Debating Law' series, Emily Jackson and John Keown re-examine the legal and ethical aspects of the euthanasia debate.Emily Jackson argues that we owe it to everyone in society to do all that we can to ensure that they experience a 'good death'. For a small minority of patients who experience intolerable and unrelievable suffering, this may mean helping them to have an assisted death. In a liberal society, where people's moral views differ, we should not force individuals to experience deaths they find intolerable. This is not an argument in favour of dying. On the contrary, Jackson argues that legalisation could extend and enhance the lives of people whose present fear of the dying process causes them overwhelming distress. John Keown argues that voluntary euthanasia and physician-assisted suicide are gravely unethical and he defends their continued prohibition by law. He analyses the main arguments for relaxation of the law - including those which invoke the experience of jurisdictions which permit these practices - and finds them wanting. Relaxing the law would, he concludes, be both wrong in principle and dangerous in practice, not least for the dying, the disabled and the disadvantaged.