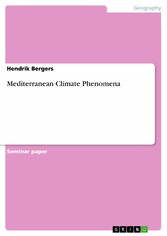 Seminar paper from the year 2013 in the subject Geography / Earth Science - Meteorology, Aeronomy, Climatology, grade: 85%, Ruhr-University of Bochum, language: English, abstract: The Mediterranean Sea is an almost enclosed basin with a coverage of 4000 km in west-east and 1200 km in north-south direction. Many European, North African and Middle Eastern states abut on this ocean and are massively influenced by it. The Mediterranean can be denoted as a cutting point between subtropical and humid climate and is influenced by both of them. This and the Mediterranean Sea lead to a very specific and individual climate around this basin. In this paper the leading factors of the climate conditions are revealed, which include references to global atmospheric circulations, regional climate patterns and micro-scale descriptions of specific phenomena in the Mediterranean. Therefore I refer to different scientific articles and mainly to two specific Mediterranean monographs (Branigan; Bolle). Because of the introducing character of this paper most phenomena are explained in a more general way and do not have reference to direct climate data. More detailed knowledge and data basis can be taken by the references and footnotes.