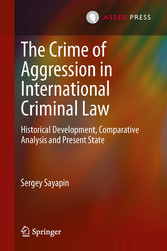 Since after the Second World War, the crime of aggression is - along with genocide, crimes against humanity and war crimes - a 'core crime' under international law. However, despite a formal recognition of aggression as a matter of international criminal law and the reinforcement of the international legal regulation of the use of force by States, numerous international armed conflicts occurred but no one was ever prosecuted for aggression since 1949. This book comprehensively analyses the historical development of the criminalisation of aggression, scrutinises in a detailed manner the relevant jurisprudence of the Nuremberg and Tokyo Tribunals as well as of the Nuremberg follow-up trials, and makes proposals for a more successful prosecution for aggression in the future. In identifying customary international law on the subject, the volume draws upon a wealth of applicable sources of national criminal law and puts forward a useful classification of States´ legislative approaches towards the criminalisation of aggression at the national level. It also offers a detailed analysis of the current international legal regulation of the use of force and of the Rome Statute´s substantive and procedural provisions pertaining to the exercise of the International Criminal Court´s jurisdiction with respect to the crime of aggression, after 1 January 2017.

Sergey Sayapin is Legal Advisor at the Regional Delegation of the International Committee of the Red Cross (ICRC) in Central Asia. He earned law degrees from universities in Uzbekistan, the United Kingdom and Germany.