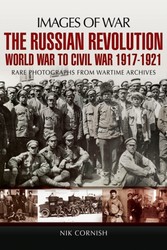 Often the drama of the October Revolution and the Bolshevik seizure of power overshadow the disastrous Russian-German war that preceded it and the extended, confusing, many-sided civil war between the Reds and the Whites that followed. But Nik Cornish's vivid photographic history gives equal coverage to each of these momentous events and shows how the Russian empire of the Romanovs was transformed into the Soviet dictatorship. Contemporary photographs show the leading characters in the drama - Tsar Nicholas II, Kerensky, Lenin and Trotsky and other Bosheviks, and the White commanders Denikin, Kolchak, Wrangel and the rest. But they also record, in an unforgettable way, the ordinary people who were caught up in the surge of events - civilian crowds on the city streets, peasant groups in the villages, the faces of common soldiers on all sides who fought on multiple fronts across Russia from Poland, the Baltic states and the White Sea to the Black Sea and Siberia. The scale of the conflict was remarkable, as was the intensity of the experience of those who took part and witnessed it, and this collection of historic photographs gives a poignant insight into the conditions of their time. It is a fascinating introduction to a period that saw a sea change in Russian history.