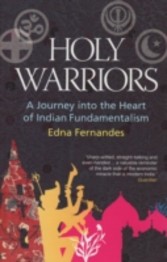 Holy Warriors - A Journey Into The Heart Of Indian Fundamentalism

Holy Warriors - A Journey Into The Heart Of Indian Fundamentalism

Home to all the major religions, India is also, inevitably, host to virtually every type of religious fanatic. No other nation has witnessed as much proselytizing or heard as many war cries in the name of God as India. For centuries, Hindus, Christians, Sikhs and Muslims have waged bloody wars, sought violent conversion and declared jihad against their enemies, as their religions have been hijacked by the forces of fundamentalism. In Holy Warriors, Edna Fernandes travels to the country's recent and past theatres of religious extremism - from Kashmir to Gujarat, Punjab to Goa - to meet the generals and foot soldiers of communal wars who assert their faith in rhetoric and rage. Theirs are stories of bigotry and bloodshed, insecurity and despair, but Fernandes listens with understanding, tolerance and a deft sense of humour, and paints a uniquely vivid and clear-sighted picture of a country divided by dogma.