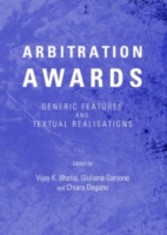 This volume focuses on arbitration awards as a discursive genre and draws on the results of research on the discourses of international commercial arbitration conducted within the framework of an international project (",International Commercial Arbitration Practices: A Discourse Analytical Study",) setting out to explore the hypothesis that, as suggested in recent times by various scholars, arbitration practice, procedures and discourses are being increasingly contaminated by litigation, thus compromising the integrity of arbitration principles. The genre investigated is especially interesting in this respect, as arbitration awards represent the final textual outcome of arbitration proceedings. The various chapters of the book, based on the analysis of different international corpora of arbitration awards in various languages (English, French, Italian, Spanish and Chinese), attack the same theme, investigating different aspects of the discursive construction of awards, with a view to identifying any elements of interdiscursivity that may provide evidence for or against the main hypothesis.The discussion of these issues also has theoretical relevance, as it provides interesting insights into the mechanisms that preside over the contamination and hybridization among genres in professional practice.