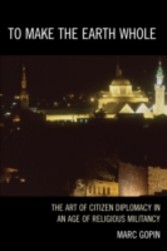 To Make the Earth Whole studies the art of citizen diplomacy_a process that can address clashes of religion and culture across regional lines even when traditional negotiations between governments can fail. While faith and regional differences have been sources of division around the world in recent decades, millions of citizens are also creating bonds of friendship and collaboration that are forming the basis of a global community. Drawing on the experiences gleaned from years practicing citizen diplomacy in some of the world's most politically charged climates, scholar-practitioner of conflict resolution and rabbi Marc Gopin describes his work in Syria as a central case study of the book. The author outlines the strategic basis for creating community across lines of enmity, the social network theory to explain how this happens, and the long term vision required for a progressive but inclusive global community that respects religious communities even as it limits their coercive power over others. This powerful and practical book outlines an incremental and evolutionary strategy of positive change that stands a strong chance of success, even in today's most conservative and repressive religious and political contexts. To Make the Earth Whole also examines the ethical challenges of citizen diplomacy from the perspectives of both Western and Eastern philosophies and religions. The world's wisdom traditions are essential in devising a way for citizens to develop the foundations for global community.