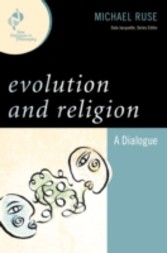 Evolution and Religion - A Dialogue

Evolution and Religion - A Dialogue

One in the series New Dialogues in Philosophy, edited by Dale Jacquette, Michael Ruse, a leading expert on Charles Darwin, presents a fictional dialogue among characters with sharply contrasting positions regarding the tensions between science and religious belief. Ruse's main characters-an atheist scientist, a skeptical historian and philosopher of science, a relatively liberal female Episcopalian priest, and a Southern Baptist pastor who denies evolution-passionately argue about pressing issues, in a context framed within a television show: 'Science versus God- Who is Winning?' These characters represent the different positions concerning science and religion often held today: evolution versus creation, the implications of Christian beliefs upon technological advances in medicine, and the everlasting debate over free will.