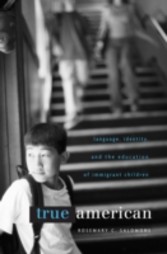 True American - Language, Identity, and the Education of Immigrant Children

True American - Language, Identity, and the Education of Immigrant Children

True American is a look at the history and current politics of languages - English and the many native languages of immigrants - as they play out in schools, historically a central force for assimilation and Americanization. While she does discuss the history of and debates over bilingual education programs, her focus is an analysis of the passionate support for an English-only America. She uses the myths about the assimilation of previous immigrant groups and the debates over how best to educate children of the ",new immigrants", as a window for exploring what it means to be a ",true American", in an age of globalization and transnationalism.Underlying her discussion of these various debates is Salomone's call for a more inclusive sense of the ",we", that demands respect for linguistic and cultural differences, rather than mere toleration. She argues that we can politically equal and culturally compatible without being culturally identical or monolingual.