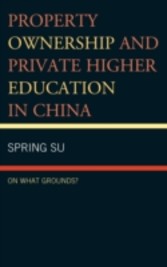 Recent decades have witnessed the proliferation in China of huge numbers of private universities and colleges in response to a wide-ranging spectrum of socio-economic and political demands under the country's flourishing market economy and its wholesale pursuit of decentralization. This book explores the issue of property ownership, an area which is regarded as an essential element in the attraction into the sector of local private institutions and foreign partnerships, as well as in facilitating the future development of the country's existing institutions. The focus throughout this book is primarily on the legal, economic, managerial and financial aspects of the relevant issues, as well as other related topics, such as consumer protections and fund-raising activities. A feasibility analysis and discussion is also provided on 'for-profit' universities and their potential market niches in China, in recognition of the fact that the current regulations-which allow private universities to maintain a non-profit status whilst actually enjoying profit returns-clearly provides some legitimacy to the phenomenon of 'for-profit in disguise.' It is argued in this book that such quasi-profit regulations may further exacerbate profiteering behavior, whilst it is also noted that, in the short term, there is a clear need to provide adequate protections within the apparent hybrid version of an ownership system-a system characterized by a mix of capitalism and socialism-through the adoption of a definitive legal framework within which economic actors can coordinate their efforts through a mutually understood framework of action. Finally, it is clear that in the transition from the 'rule-of-the-people' to the 'rule-of-law,' legislation, practices and compliance do not always go hand-in-hand in China, thus the healthy development of the educational sector will undoubtedly require some time, as well as the introduction of complementary mechanisms, for such legislation to be fully enforced in practice. This book concludes with policy recommendations on the existing property ownership system in China to address both the profitability and altruistic concerns of private institutions, and provides suggestions for areas which might be explored to facilitate ongoing sector development.