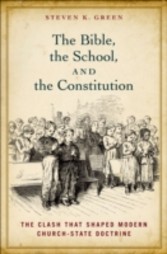 Bible, the School, and the Constitution:The Clash that Shaped Modern Church-State Doctrine

Bible, the School, and the Constitution:The Clash that Shaped Modern Church-State Doctrine

Few constitutional issues have been as contentious in modern times as those concerning school prayer and the public funding of religious schools. But as Steven K. Green reveals in The Bible, the School, and the Constitution, this debate actually reached its apogee just after the Civil War, between 1863 and 1876. Green shows that controversy over Bible reading in public schools, commonly called ",the School Question,", captured national attention to an unprecedented degree.Public education during the nineteenth century faced many competing pressures, including a widespread belief that schooling required a moral if not religious basis, a belief among many Protestants that Catholic immigration presented a threat to Protestant culture and to republican values, the need to accommodate increasing religious pluralism in the schools, and evolving understandings of constitutional principles. The School Question provided Americans with the opportunity to address and articulate these pressures, and to engage in a grand-and sometimes not so grand-public debate over the meaning of separation of church and state. Green demonstrates that the modern Supreme Court's decisions on school funding and Bible reading did not create new legal doctrines or abolish dominant practices, but built on legal concepts and educational trends that had been developing since the early nineteenth century. He also shows that while public reaction to a growing Catholic presence was a leading factor in this development, it was but one element in the rise of the legal doctrines the high court would embrace in the mid-twentieth century.Rarely in the nation's history have people from such various walks of life-Protestants and Catholics, skeptics and theocrats, nativists and immigrants, educators and politicians-been able to participate in a national discussion over the meaning of a constitutional principle. The debates of this period laid the foundation for constitutional arguments that still rage today.