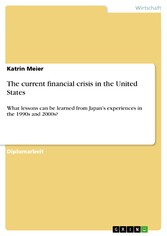 The current financial crisis in the United States - What lessons can be learned from Japan's experiences in the 1990s and 2000s?

The current financial crisis in the United States - What lessons can be learned from Japan's experiences in the 1990s and 2000s?

Diplomarbeit aus dem Jahr 2009 im Fachbereich BWL - Wirtschaftspolitik, Note: 1,0, Georg-Simon-Ohm-Hochschule Nürnberg, Sprache: Deutsch, Abstract: The current financial crisis, which started in the Unites States, has dominated the headlines all around the world since summer 2007 and especially after Lehman Brothers' breakdown in September 2008. Wall Street legends like Bear Stearns, Merrill Lynch or Citigroup as well as insurance and mortgage giants like AIG, Fannie Mae or Freddie Mac had to either go out of business or were bailed out by the U.S. government. What started as a subprime crisis in the beginning soon turned to a global financial crisis and then changed to a worldwide recession. Governments around the world try to fix their financial system and to restore economic health. (...) The current crisis in the U.S. has parallels with a range of other crisis such as the Great Depression or the U.S. Savings and Loans crisis. Rogoff and Reinhart, for instance, compared the current crisis with a wide range of other crises (2008) However, The Economist (2009d), Posen (2009), Kobayashi (2008b), Koo (2008), Krugman (2009d) and Nakamae (2008) are just few of many well-known authors who state that Japan's experience in the 1990s is the most suitable for serving as a reference to the United States. Despite many differences between both crises, I agree with Koo who points out that the U.S. is 'extremely fortunate' to have the opportunity to learn from Japan's experiences, a country which 'went through something very similar just fifteen years ago' (2008, 69). (...) The objective of this paper is to explain what the U.S. can learn from Japan's experience and to give a road map of how to respond to the unfolding events in financial markets. (...) The current head of the Federal Reserve Ben Bernanke studied Japan's crisis in depth during the 1990s and 2000s and hopefully, U.S. policymakers will make good use of those lessons in order to minimize the pains of the U.S. economy. This paper is divided into four sections. The first section provides an overview of the events that led to what the International Monetary Fund (IMF) then called the 'largest financial shock since the Great Depression' (Stewart 2008). The second part explains how the crisis in Japan unfolded and why it took so long until policy measures had a significant positive impact. The third part shortly summarizes America's response to the crisis so far. The final part tries to answer the question what America can learn from Japan when it comes to handling its crisis.