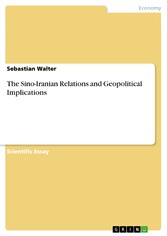 The Sino-Iranian Relations and Geopolitical Implications

The Sino-Iranian Relations and Geopolitical Implications

Scientific Essay from the year 2009 in the subject Business economics - Economic Policy, grade: A+, University of Auckland, language: English, abstract: This research paper investigates the Sino-Iranian relations in the 21st century. In particular, it examines economic ties, diplomatic and military ties, and ideological and cultural ties. Moreover, the essay gives two main ideas of possible geopolitical implications based on the China's Iran-relations, particularly in the light of the current nuclear crisis. Firstly, considering China's embeddedness into the international economy, the paper argues that Beijing would ultimately favour benign relations with the U.S. over further Iran support in order to facilitate its top priority: economic growth. Secondly, looking on Iran's possible accession to the Shanghai Cooperation Organization, it is argued that the latter would not only hurt Sino-U.S. relations, but also potentially lead to the advancement of Chinese and Russian ideologies. Based on the first implication, this paper views the second implication as rather unlikely.