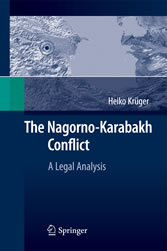 The Nagorno-Karabakh Conflict - A Legal Analysis

The Nagorno-Karabakh Conflict - A Legal Analysis

The Caucasus region, situated on a natural isthmus between the Black Sea and the Caspian Sea, has long been a border zone and a melting pot for a diverse range of cultures and peoples. As the intersection between Europe and Asia, and also - tween Russia and the Ottoman and Persian Empires, it has featured in the strategic plans of numerous great powers over the centuries. Given its abundance of natural resources, the ready-made raw material transport routes to Europe and its enduring position on the edge of Russia, nothing has changed to the present day. The tremendous development opportunities of the Caucasian region are being tarnished by unresolved territorial conflicts that put a continual and regionally balanced growth, sustained democratisation and long-term stability at risk. These conflicts, which all erupted with the dissolution of the Soviet Union, include the separatist movements in Abkhazia, Chechnya, Nagorno-Karabakh and South - setia. The war over South Ossetia, which erupted between Russia and Georgia in August 2008, spelt out the explosive potential still inherent in these conflicts.