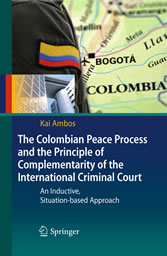 The Colombian Peace Process and the Principle of Complementarity of the International Criminal Court - An Inductive, Situation-based Approach

The Colombian Peace Process and the Principle of Complementarity of the International Criminal Court - An Inductive, Situation-based Approach

Striking a balance between peace and justice has long been debated by scholars and practitioners. There has been definite progress in a world in which blanket amnesties were at times granted with little hesitation. There is a growing understanding that accountability has both pragmatic and principled arguments in its favor. Practical arguments as much as shifts in norms have created a situation in which the choice is increasingly seen as 'which forms of accountability' rather than a stark one between peace and justice. The Colombian Justice and Peace Law 975 and its implementation offer an interesting and unique approach to dealing with the international crimes committed in Colombia's decades-long armed conflict. Yet, will this approach suffice with regard to Colombia's obligations under international law to investigate and prosecute international crimes? Does it meet the standards of the ICC, which has been monitoring the Colombian situation for some time now? In particular, does it pass the complementarity test laid out in the ICC statute or will the ICC have to intervene in Colombia to enforce international criminal law?