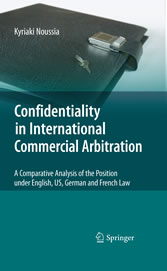 Confidentiality in International Commercial Arbitration - A Comparative Analysis of the Position under English, US, German and French Law

Confidentiality in International Commercial Arbitration - A Comparative Analysis of the Position under English, US, German and French Law

Arbitration is an essential component in business. In an age when transparency is a maxim, important issues which the laws governing arbitration currently fail to address are the extent to which disclosure of information can be constrained by private agreement along with the extent to which the duty to preserve confidentiality can be stretched. Absent a coherent legal framework and extensive qualitative and quantitative data, it is equally difficult to suggest and predict future directions. This book offers a tool for attaining centralised access to otherwise fragmentary and dispersed material, as well as a comprehensive analysis and detailed exposition of the position in relation to confidentiality in arbitration in the jurisdictions of England, USA, France and Germany.


Dr. Kyriaki Noussia, Ph.D., LL.M., is an Alexander von Humboldt Research Fellow (2007-2010) at the University of Hamburg (Faculty of Law, Institute of Procedural Law) and at the Max Planck Institute for comparative and international private law in Hamburg, Germany. Prior to that, she held academic positions in the UK, most recently at Birmingham Law School (University of Birmingham, UK) where she was the C.S.E.T. Lecturer in Common Law (2004-2007). She has held visiting appointments at various universities and other academic institutions. She is also a barrister and solicitor in Greece (Athens Bar Association) and a member of various associations and committees in the field of transport law, maritime law, international commercial law, international procedural and arbitration law. Her key research areas are international commercial law, arbitration, and private international law.