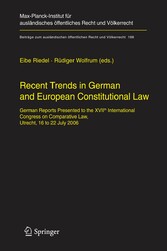 1. Material Content and Limits of the Precautionary Principle in German Law

For many years the necessity to reflect on the conditions and limits of the precautionary principle has become apparent.10 Being a binding, but rather abstract legal concept it has been adapted to many different circumstances and largely depends on its concrete realization through various statutes.11 § 4 of the legal expert draft of a General Part of an Environmental Code (Umweltgesetzbuch – Allgemeiner Teil – Entwurf – UGB-AT-E) defines the precautionary principle as the requirement to strive towards precluding preventable or unforeseeable environmental degradation by adequate measures, in particular by long-term planning and by emission limitations according to the technical state of the art.

12 § 5 (1) of the Draft of the Commission on the Creation of an Environmental Code (UBG-KomE) in a more all-encompassing way maintains the necessity to prevent or reduce risks to the environment and human health, in particular by farsighted measures, by planning and by adequately applied technical measures.

13 § 5 (2) states that “precaution serves the protection of sensitive constituents of the balance of nature”. 14 Although these draft laws have not been enacted yet, they provide a good basis for understanding the nature of the precautionary principle.15 From a scientific point of view, risks are assessed by multiplying the probability of damage by the severity of that damage.16 In German law there is a discussion whether the precautionary principle should only be understood as precaution against risks or additionally as requiring precautions to ensure the preservation of resources, which is related to the term “sustainable development”.

Risk precaution basically means shifting the classical notion of danger prevention towards areas where a danger does not yet exist, although it appears very hard in practice to differentiate between the two situations. Some authors identify a certain tendency of police law, which traditionally has dealt with dangers, to increasingly adopt the structure of risk administration. According to a statement of Di Fabio, “the great ‘softener’ of the precautionary principle has for a long time infiltrated the field of danger prevention”. Others state that the precautionary principle does not aim at achieving something other than danger prevention, but that it requires different instruments and follows different categories."