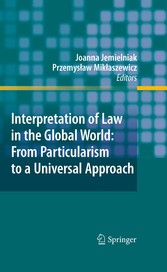 Interpretation of Law in the Global World: From Particularism to a Universal Approach

Interpretation of Law in the Global World: From Particularism to a Universal Approach

"Chapter 1 Transformations in Law Interpretation: Towards a Universal Approach – The Phenomenon, Causes and Symptoms (p. 31-32)

Abstract This chapter refers to the context and features of interpretation, understood as a process of extracting the law, and not to the contents of law read through interpretation. The globalisation of contemporary exchange forces a more global approach to interpretation. Novel law instruments – in order to meet demand – must bear the feature of universality. The purpose to be achieved becomes an element of the very concept of interpreting law. The law becomes a multicentre system encompassing national law, European law and the law of human rights. The interpretation of law should reinforce the consistency of the multicentre system and avoid its fractioning or disintegration. Meanwhile, deficiencies in the dialogue between domestic and international courts (ECtHR and ECJ) occur. Furthermore, examples may be given of interpretation imposed vi imperii by international courts, without sound and convincing explanation. This practice results in the “split interpretation”, entailing a certain decomposition of the dogmatics of law and revealing a culturally counterproductive facet.

The subtitle of the volume (“From Particularism to a Universal Approach”) devoted to the interpretation of law in the contemporary globalised world emphasises its dynamics and draws attention to the very mechanism of law interpretation. From this perspective, it is a process, an emergence (“what happens to interpretation”) that corresponds to the subject of the book, rather than a statically rendered condition (“where the interpretation leads”).

1.2 Law (as text) exists only through its meaning

Law is revealed only in the process of interpretation. What is more, it exists solely because of interpretation. Those who apply the law (law in action – for the sake of simplicity we may assume it is always the court) and those who write about the law (commentators – law in books) depict as such (deciding cases, commenting on law) mere results of their interpretation, various readings of the law, instead of the law itself. As a result, the law itself exists objectively, at best, as a printed piece of paper. As to the meaning of the text – it is always a construction of the reader, i.e. the interpreter. An unread and undeciphered text stands void of meaning. The word “void” does not mean here that the text is “insignificant”, but merely that it remains solely the carrier of what was recorded therein, but not as meaning – the latter concept understood as a matter of social communication."