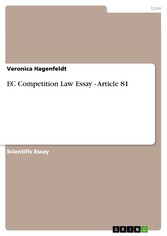 Scientific Essay from the year 2009 in the subject Law - European and International Law, Intellectual Properties, grade: Distinction, University of Edinburgh (School of Law), course: EC Competition Law, language: English, abstract: Despite the ambitious efforts of Article 81 to catch as much anticompetitive conduct as possible through its broadly defined 'agreements' and 'concerted practices', the title statement is nevertheless correct in stating that genuinely unilateral conduct escapes its scope. By analysing the limitations of Articles 81 and 82 EC, Part 1 of the essay will establish what constitutes genuinely unilateral anticompetitive conduct that slips through the net of both Articles. However, it is not only the direct limitations of Article 81 that render it incapable of catching unilateral conduct, but also the problematic issue regarding the 'exact delimitation of the concept of an 'agreement' within the meaning of Art 81(1), and the distinction between such an agreement and unilateral conduct'. This paper shares the view expressed in the title statement; Article 81 will require an amendment if it is to catch more unilateral conduct because its current flaws prevent it from achieving more. In order to justify this stance, this paper shall in Part 2 and Part 3 conduct a thorough investigation and evaluation of the legal evolution of how the European Courts and the Commission have determined where the borderline lies between unilateral conduct in vertical restraints and between an 'agreement' within the meaning of Article 81. As will be shown, the EC institutions - especially the Courts - have recently become more restrictive in their definition of what constitutes an agreement under Article 81. This development has had the regrettable result of allowing even more unilateral conduct to go uncaught. As a result of both the direct limitations of the Articles and of the now more restricted definition applied to an agreement, an amendment of Article 81 is in fact the only way in which this unilateral anticompetitive behaviour could be brought within the scope of EC competition law. Lastly, the essay disagrees with the notion that the proposed amendment would have the effect of encroaching on the provisions of Article 82, as it would target only genuinely unilateral conduct which by definition also escapes the provisions of Article 82.