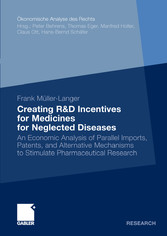 “Today, in what is now a globalizing market economy, a growing injustice confronts us. More than 90% of all death and suffering from infectious diseases occurs in the developing world. Some of the reasons that people die from diseases like AIDS, TB, sleeping sickness and other tropical diseases are that lifesaving essential medicines are either too expensive, are not available because they are not seen as financially viable, or because there is virtually no new research and development for priority tropical diseases. This market failure is our next challenge.”

Moreover, 98 percent of children who die before their fifth birthday live in the developing world as do all but a few thousand of the millions who die prematurely of TB, malaria, tetanus or measles. We shall analyze the market failure mentioned above with respect to R&D for medicines for neglected infectious and tropical diseases and the lack of short-term access to affordable medicines in low-income countries. In recent years several disease-based initiatives supported by governments and private foundations have been set up in order to solve the problem of underinvestment in R&D for pharmaceuticals and insufficient access to medicines in developing countries.

Examples include the Medicines for Malaria Venture (“MMV”) which accounts for most of today’s antimalarial drug development projects, the Global Alliance for TB Drug Development (“TB Alliance”) and the Special Programme for Research and Training in Tropical Diseases (“TDR”) set up by UNICEF, UNDP, World Bank and WHO. The MVV and TB Alliance’s main objective is to convert drug candidates into registered entities.

Moreover, they are managed as non-for-profit ventures and employ a social venture capital model that is funded by the public sector. Usually, they collaborate with partners from the pharmaceutical industry, academia and development agencies and rely on business drug development models. Newer sources of funding like the Bill & Melinda Gates Foundation8 play a significant role in securing short and medium term budgets.

Despite the programs mentioned above the world’s poorest regions are still suffering from death and disability from infectious diseases for which vaccines either exist but need improvement or do not exist at all. In fact, deaths caused by infectious diseases contribute most to the health disparity between rich and poor countries (comparative life expectancy at birth being 77 and 52 years respectively).

Despite substantial advances in molecular biology with regard to the biology of the parasites that cause leishmania, African trypanosomiasis or malaria virtually no new chemical entities for these diseases have been developed and marketed so far. Adequate and sufficient R&D for new medicines against these diseases does not exist. For instance, R&D for HIV/AIDS per fatal case is at least 80 times higher than for malaria.

Table 1 shows 20 diseases for which 98 percent of the global burden fell on developing countries. For all these diseases, virtually no R&D efforts are aimed at producing appropriate treatments because potential consumers are too poor to generate sufficient demand which would allow pharmaceutical producers to cover their R&D costs.

With respect to the potential incentives for R&D through patent protection the analysis will not consider HIV/AIDS as it is a different disease in the sense that there are strong incentives for pharmaceutical companies in the Northern Hemispehre to develop drugs and treatments for patients in high-income economies.

As these incentives have already spurred the development of effective pharmaceutical products and treatments, the debate concerning HIV/AIDS has shifted to how these medicines can be transferred to patients in poor countries.Trouiller et al. (2002) analyze quantitatively and qualitatively the global drug development output over a period from 1975 to 1999 and conclude that there is an underinvestment in R&D for pharmaceutical products for the diseases mentioned above.