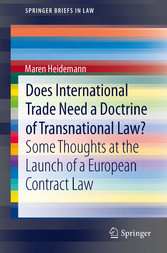 Does International Trade Need a Doctrine of Transnational Law? - Some Thoughts at the Launch of a European Contract Law

Does International Trade Need a Doctrine of Transnational Law? - Some Thoughts at the Launch of a European Contract Law

This paper looks at the current status and role of specific commercial contract law both national and international in view of recent European contract law reform. It reviews the value and necessity of a special and separate contract law for merchants in a global market and discusses critically the terminology, doctrine and objectives which this law is based upon. For a long time the choice of transnational law rules which are often non-state law has been marginalised and made impossible in state court proceedings. The new Common European Sales Law circumvents this problem by proposing to be used as national law. International practice in commercial dispute settlement may therefore still remain at the forefront of promoting and modelling the use of transnational contract law.