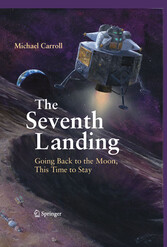 The Seventh Landing - Going Back to the Moon, This Time to Stay

The Seventh Landing - Going Back to the Moon, This Time to Stay

It's been thirty-five years since people last trod the dusty plains of the Moon. Over the course of six landings from 1969 to 1972, twelve men explored, four-wheeled, dug and hiked across the lunar surface. Now, NASA has plans for a seventh landing on the Moon. This time, they want to stay. NASA's plans, dubbed the Constellation architecture, involve the largest launch vehicle ever built, new types of propulsion, and a six-person vehicle to ferry crews from Earth to the Moon. But NASA's plans go far beyond Luna. Eventually, the lessons learned on the Moon's outpost at Shackleton Crater will teach us how to live-permanently-on the most Earthlike world in our solar system, Mars. NASA will have company: plans for future lunar exploration are being drawn by Europe, Japan, China and India.
While specific hardware and mission details will be in flux for some time, the overarching goals, strategies and inspiration for the seventh landing will not change. This book will choose a typical scenario for getting to the Moon that embraces the spirit of exploration embodied by NASA's Constellation architecture. Each chapter moves from a general description to the specific nuts-and-bolts of engineering and science. The Seventh Landing reveals the very latest strategies for how we'll get to the Moon, what we know today, what we want to find out, and what life will be like at the first true outposts on the Moon and Mars.


Artist/writer Michael Carroll's 20 years as a science journalist have left him well-connected in the planetary science community. For The Seventh Landing project, he has contacts with Lockheed/Martin (contractor for the Orion spacecraft and Ares launch vehicles), Johnson Spaceflight Center, NASA/Ames (overseeing the Mars portion of the Constellation architecture) and other technicians and engineers involved in projects as diverse as the early Mercury and Gemini programs to the ISS. He is a Fellow of the International Association for the Astronomical Arts, and has written articles and books on topics ranging from space to archeology. His articles have appeared in Popular Science, Astronomy, Sky and Telescope, Astronomy Now (UK), and a host of children's magazines. His latest book, Alien Volcanoes, is due out through Johns Hopkins University Press in fall of 2007.
Carroll has done commissioned artwork for NASA and the Jet Propulsion Laboratory. His art has appeared in several hundred magazines throughout the world, including National Geographic, Time, Smithsonian, Astronomy, and others. One of his paintings was flown aboard Russia's MIR space station. Carroll is the 2006 recipient of the Lucien Rudaux Award for lifetime achievement in the Astronomical Arts.