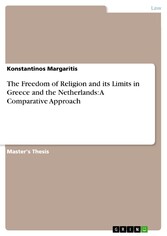 The Freedom of Religion and its Limits in Greece and the Netherlands: A Comparative Approach

The Freedom of Religion and its Limits in Greece and the Netherlands: A Comparative Approach

Master's Thesis from the year 2009 in the subject Law - Public Law / Constitutional Law / Basic Rights, grade: 7/10, Tilburg University, language: English, abstract: Freedom of religion is of classical value. It concerns everyone and therefore has attracted much of research activity worldwide. The purpose of this paper is to present the freedom of religion as it is included in the Constitutions of two EU Member States with a different cultural and historical background, Greece and the Netherlands. The starting point will be the constitutional history of the countries concerning this specific freedom and its constitutional development up to nowadays. A brief case-law analysis of important ECHR cases is also included. Afterwards, a comparative approach is attempted with reference to the major historical and social facts that influenced changes and policies adopted within the status of freedom of religion in Greece and the Netherlands.