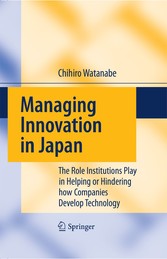 This book summarizes highlights of the investigation of 'An Elucidation of the Role of Institutional Systems in Characterizing Technology Development Trajectories - A Global Comparative Analysis of Manufacturing Technology and Information Te- nology in the Enhancement of Business Practice' supported by Grant-in-Aid for Scienti?c Research (S) by Japan's Ministry of Education, Culture, Sports, Science and Technology/Japan Society for Science Policy over the period 2002-2006. Background and objectives of the investigation are summarized as follows: (a) Japan ranks far below the level of the USA with respect to the development and utilization of information technology (IT) in the information society that emerged in the 1990s. (b) This can be attributed toa vicious cycle between Japan's non-elastic institutions, insuf?cient utilization of the potential bene?ts of IT, and economic stagnation. (c) The source of such a vicious cycle can be derived from the fundamental d- ferences of the characterizing process of technology between manufacturing technology (MT) and IT during their diffusion processes. This investigation - tempted to elucidate this mechanism. Noteworthy ?ndings obtained include: (a) MT has been developed largely by the supply side and its functionality is - tablished during the stage of its supply to the market. In contrast, IT is strongly driven by the demand side and its functionality is created through diffusion in a self-propagating way. This contrast can be clearly observed in the dramatic advancement of Japan's mobile phone industry in the late 1990s.