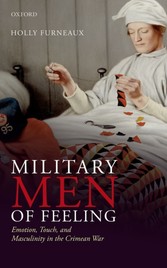 Military Men of Feeling - Emotion, Touch, and Masculinity in the Crimean War

Military Men of Feeling - Emotion, Touch, and Masculinity in the Crimean War

Military Men of Feeling considers the popularity of the figure of the gentle soldier in the Victorian period. It traces a persistent narrative swerve from tales of war violence to reparative accounts of soldiers as moral exemplars, homemakers, adopters of children on the battlefield and nurses. This material invites us to think afresh about Victorian masculinity and Victorian militarism. It challenges ideas about the separation of military and domestic life,and about the incommunicability of war experience. Focusing on representations of soldiers' experiences of touch and emotion, the book combines the work of well known writers-including Charles Dickens, Charles Kingsley, William Makepeace Thackeray, Charlotte Yonge-with previously unstudied writing andcraft produced by British soldiers in the Crimean War, 1854-56. The Crimean War was pivotal in shaping British attitudes to military masculinity. A range of media enabled unprecedented public engagement with the progress and infamous 'blunders' of the conflict. Soldiers and civilians reflected on appropriate behaviour across ranks, forms of heroism, the physical suffering of the troops, administrative management and the need for army reform. The book considers how the military man of feeling contributes to the rethinking of gender roles, class and militaryhierarchy in the mid-nineteenth century, and how this figure was used in campaigns for reform. The gentle soldier could also do more bellicose social and political work, disarming anti-war critiques and helping people to feel better about war. This book looks at the difficult mixed politics of this figure. It considers questions, debated in the nineteenth century and which remain urgent today, about the relationship between feeling and action, and the ethics of an emotional response to war. It makes a case for the importance of emotional and tactile military history, bringing the Victorian military man of feeling into contemporary debates about liberal warriors and soldiers as social workers.