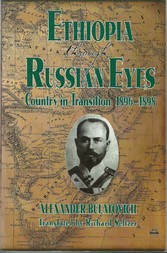 established in 1974, as B&R Samizdat Express

Books by the Richard Seltzer available from Seltzer Books:

The Name of Hero

Ethiopia Through Russian Eyes (translation from the Russian)

The Lizard of Oz

Now and Then and Other Tales from Ome

Saint Smith and Other Stories

The Gentle Inquisitor and Other Stories

Echoes from the Attic (with Ethel Kaiden)

Heel, Hitler and Other Plays

Dryden's Exemplary Drama and Other Essays

A review of this book in "Old Africa" begins: "Despite its bland title, this is the most important book on the history of eastern Africa to have been published for a century. And it was written over a century ago! ... Based on Bulatovich's day-to-day diary, it is not only the sole but a vivid first-hand description of how Menelik II created his Ethiopian Empire."  Complete text of that review below.

Richard Seltzer's historical novel The Name of Hero is based on the life of Alexander Bulatovich.  It is available on the web and also as an ebook at Kobo and at Nook (Barnes & Noble).

Sources and related documents are available on the Web.

WITH THE ARMIES OF MENELIK II BY ALEXANDER BULATOVICH, TRANSLATED BY RICHARD SELTZER

A young Russian cavalry officer witnessed as Ethiopia vied with Italy, France, and England for control of previously unexplored territory in east-central Africa. His two books are an important source of historical and ethnographic information about that little-known but critical and exciting period.

Almost all official Ethiopian documents from the 1890s were destroyed during the war with Italy in 1936. The historical record depends largely on the observations of European explorers and visitors, of whom Alexander Bulatovich was one of the very best. The books included here cover the first two (1896-97 and 1897-98) of his four trips to Ethiopia.

Bulatovich sensed that Ethiopia was in a delicate state of transition, that what he was seeing would not remain or even be remembered in a generation or two. He had the instincts, although not the training, of an anthropologist, trying to preserve some record of fast-disappearing cultures. But he was not a scientist who observed with cool detachment. Rather, he was actively involved in the events he described, particularly on the expedition to Lake Rudolf. He became ambivalent, torn by his military duty (as an officer attached to the army of Ras Wolda Giyorgis) and by his personal values and sense of justice. Time and again, he found himself party to the decimation of the very people whose culture he wanted to preserve.

He approached his subject with enthusiasm, fascination, and, at times, with almost religious respect. He did not presume that European culture and technology were morally superior. Nor did he romantically prefer the "primitive."

Empathizing with many of the peoples he encountered, he witnessed the tragedy of the clash between traditional ways and modern arms. He considered modernization inevitable, but preferred that it be done in the most humane manner. Hence he considered conquest and gradual change under the Amharic rulers of Ethiopia as preferable to the total destruction which would be likely in case of conquest by a European power.

Bulatovich had a strong natural interest in military and religious matters, and that was at the heart of his respect for these people. He saw the Abyssinian military as having recently passed through a golden age of cavalry charges and individual heroism, which called to mind the by-gone days of medieval Europe. He saw the Ethiopian Church as close to the Russian Orthodox Church and the origins of Christianity, and he greatly respected all the details of their belief and practice, and all their unique legends and saints.

He was, however, a product of his time: the time of Kipling and the Berlin Conference. In those days, it was common for Europeans to make judgements about cultures, based on a scale in which their own culture was at the top. He shows great respect for and understanding of Amhara, Galla (Oromo), and several other Ethiopian peoples and cultures, with whom he had prolonged contact and whose languages he learned. But he uses strong negative terms to describe the people and cultures of what is now Southern Ethiopia. In part, this prejudice is due to ignorance -- he had little contact with these people and did not understand their language. In part, too, it was a reflection of the attitudes of his comrades-in-arms -- Amhara and Galla warriors -- who also were encountering these people for the first time, and for whom they were just as foreign and incomprehensible as they were to Bulatovich.

His works should appeal to anyone interested in the history or anthropology of Africa and Ethiopia. They also provide a clear picture of the relations between Russia and Ethiopia in the 1890s, which planted the seeds of their present-day relations. And these accounts can help fill in historical details regarding events and individuals during that era, and can serve as a valuable resource to specialists.

Up until now, the main source in English about Russian activities in Ethiopia and their observations of that country has been The Russians in Ethiopia: An Essay in Futility by Czeslaw Jesman. This is an amusing collection of rumors and anecdotes, based primarily on Italian sources. Unfortunately, it is often wrong; but, in the absence of a better source, its errors have often been repeated.

One speech which Bulatovich made to the Russian Geographical Society was translated into Italian and French and is frequently cited. But his two books, up until now, were available only in Russian. Hence his observations and contributions have remained virtually unknown in the West.

Bulatovich's first book, From Entotto to the River Baro, published in 1897, consists of journals of two excursions he went on during his first trip to Ethiopia 1896-97, plus a series of essays based on what he heard and observed during his year-long stay with the Russian Red Cross Mission. The essays deal with various peoples of Ethiopia (Galla/Oromo, Sidamo, Amhara) -- their history, culture, way of life, beliefs and languages; on the governmental system and its historical background, on the army, on commerce, and on the Emperor's family.

With the Armies of Menelik II, published in 1900, is the journal of Bulatovich's second trip to Ethiopia 1897-98, during which he served as an advisor to the army of Ras Wolda Giyorgis as it conquered the previously little-known southwestern territories from Kaffa to Lake Rudolf. Here he builds on his previous knowledge of the country and also recounts an exciting personal story of military adventure, which builds to a climax in the final chapters.

Both books, edited and with an introduction by Isidor Savvich Katsnelson, were reissued by The Institute of Oriental Studies in Moscow in 1971.

I first discovered Bulatovich in the London Times of 1913, while looking for another story, on which I wished to base a novel. The article described how Russian troops had besieged two monasteries at Mount Athos in Greece and exiled some 660 monks to remote parts of the Russian Empire for believing that "The Name of God was a part of God and, therefore, in itself divine." Bulatovich -- a former cavalry officer who had "fought in the Italo-Abyssinian campaign, and afterwards in the Far East" -- was the leader and defender of the monks. ("Heresy at Mount Athos: a Soldier Monk and the Holy Synod," June 19, 1913).

News was a more leisurely business then than now. The reporter drew an analogy to characters in a novel by Anatole France and drew an interesting sketch of the background and motivations of the main figure. I got the impression of...