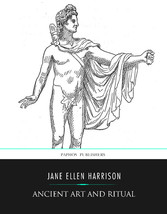 CHAPTER I ART AND RITUAL

THE TITLE OF THIS BOOK may strike the reader as strange and even dissonant. What have art and ritual to do together? The ritualist is, to the modern mind, a man concerned perhaps unduly with fixed forms and ceremonies, with carrying out the rigidly pre-scribed ordinances of a church or sect. The artist, on the other hand, we think of as free in thought and untrammelled by convention in practice; his tendency is towards licence. Art and ritual, it is quite true, have diverged to-day; but the title of this book is chosen advisedly. Its object is to show that these two divergent developments have a common root, and that neither can be understood without the other. It is at the outset one and the same impulse that sends a man to church and to the theatre.

Such a statement may sound to-day paradoxical, even irreverent. But to the Greek of the sixth, fifth, and even fourth century B.C., it would have been a simple truism. We shall see this best by following an Athenian to his theatre, on the day of the great Spring Festival of Dionysos.

Passing through the entrance-gate to the theatre on the south side of the Acropolis, our Athenian citizen will find himself at once on holy ground. He is within a temenos or precinct, a place “cut off” from the common land and dedicated to a god. He will pass to the left (Fig. 2, p. 144) two temples standing near to each other, one of earlier, the other of later date, for a temple, once built, was so sacred that it would only be reluctantly destroyed. As he enters the actual theatre he will pay nothing for his seat; his attendance is an act of worship, and from the social point of view obligatory; the entrance fee is there-fore paid for him by. the State.

The theatre at Athens is not open night by night, nor even day by day. Dramatic performances take place only at certain high festivals of Dionysos in winter and spring. It is, again, as though the modern theatre was open only at the festivals of the Epiphany and of Easter. Our modern, at least our Protestant, custom is in direct contrast. We tend on great religious festivals rather to close than to open our theatres. Another point of contrast is in the time allotted to the performance. We give to the theatre our after-dinner hours, when work is done, or at best a couple of hours in the afternoon. The theatre is for us a recreation. The Greek theatre opened at sunrise, and the whole day was consecrated to high and strenuous religious attention. During the five or six days of the great Dionysia, the whole city was in a state of unwonted sanctity, under a taboo. To distrain a debtor was illegal; any personal assault, however trifling, was sacrilege.

Most impressive and convincing of all is the ceremony that took place on the eve of the performance. By torchlight, accompanied by a great procession, the image of the god Dionysos himself was brought to the theatre and placed in the orchestra. Moreover, he came not only in human but in animal form. Chosen young men of the Athenians in the flower of their youth—epheboi—escorted to the precinct a splendid bull. It was expressly ordained that the bull should be “worthy of the god “; he was, in fact, as we shall presently see, the primitive incarnation of the god. It is, again, as though in our modern theatre there stood, “sanctifying all things to our use and us to His service,” the human figure of the Saviour, and beside him the Paschal Lamb.

But now we come to a strange thing. A god presides over the theatre, to go to the theatre is an act of worship to the god Dionysos, and yet, when the play begins, three i times out of four of Dionysos we hear nothing. We see, it may be, Agamemnon returning from Troy, Clytemnestra waiting to slay him, the vengeance of Orestes, the love of Phædra for Hippolytos, the hate of Medea and the slaying of her children: stories beautiful, tragic, morally instructive it may be, but scarcely, we feel, religious. The orthodox Greeks themselves sometimes complained that in the plays enacted before them there was “nothing to do with Dionysos.”

If drama be at the outset divine, with its roots in ritual, why does it issue in an art profoundly solemn, tragic, yet purely human? The actors wear ritual vestments like those of the celebrants at the Eleusinian mysteries.

Why, then, do we find them, not executing a religious service or even a drama of gods and goddesses, but rather impersonating mere Homeric heroes and heroines? Greek drama, which seemed at first to give us our clue, to show us a real link between ritual and art, breaks down, betrays us, it would seem, just at the crucial moment, and leaves us with our problem on our hands.

Had we only Greek ritual and art we might well despair. The Greeks are a people of such swift constructive imagination that they almost always obscure any problem of origins. So fair and magical are their cloud-capp’d towers that they distract our minds from the task of digging for foundations. There is scarcely a problem in the origins of Greek mythology and religion that has been solved within the domain of Greek thinking only. Ritual with them was, in the case of drama, so swiftly and completely transmuted into art that, had we had Greek material only to hand, we might never have marked the transition. Happily, however, we are not confined within the Greek paradise. Wider fields are open to us; our subject is not only Greek, but ancient art and ritual. We can turn at once to the Egyptians, a people slower-witted than the Greeks, and watch their sluggish but more instructive operations. To one who is studying the development of the human mind the average or even stupid child is often more illuminating than the abnormally brilliant. Greece is often too near to us, too advanced, too modern, to be for comparative purposes instructive.

Of all Egyptian, perhaps of all ancient deities, no god has lived so long or had so wide and deep an influence as Osiris. He stands as the prototype of the great class of resurrection-gods who die that they may live again. His sufferings, his death, and his resurrection were enacted year by year in a great mystery-play at Abydos. In that mystery-play was set forth, first, what the Greeks call his agon, his contest with his enemy Set; then his pathos, his suffering, or downfall and defeat, his wounding, his death, and his burial; finally, his resurrection and “recognition,” his anagnorisis either as himself or as his only begotten son Horus. Now the meaning of this thrice-told tale we shall consider later; for the moment we are concerned only with the fact that it is set forth both in art and ritual.

At the festival of Osiris small images of the god were made of sand and vegetable earth, his cheek bones were painted green and his face yellow. The images were cast in a mould of pure gold, representing the god as a mummy. After sunset on the 24th day of the month Choiak, the effigy of Osiris was laid in a grave and the image of the previous year was removed. The intent of all this was made transparently clear by other rites. At the beginning of the festival there was a ceremony of ploughing and sowing. One end of the field was sown with barley, the other with spelt; another part with flax. While this was going on the chief priest recited the ritual of the “sowing of the fields.” Into the “garden” of the god, which seems to have been a large pot, were put sand and barley, then fresh living water from the inundation of the Nile was poured out of a golden vase over the “garden” and the barley was allowed to grow up. It was the symbol of the resurrection of the god after his burial, “for the growth of the garden is the growth of the divine substance.”

The death and resurrection of the gods, and pari passu of the life and fruits of the earth, was thus set forth in ritual, but—and this is our immediate point—it was also set forth in definite, unmistakable art. In the great temple of Isis at Philæ there is a chamber dedicated to Osiris. Here is represented the dead Osiris. Out of his body spring ears of corn, and a priest waters the growing stalk from a pitcher. The inscription to the picture reads: This is the form of him whom one may not name, Osiris of the mysteries, who springs from the returning waters. It is but another presentation of the ritual of the month Choiak, in which effigies of...