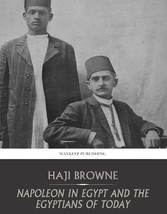 Bonaparte in Egypt and the Egyptians of Today

Bonaparte in Egypt and the Egyptians of Today

CHAPTER I THE STORY OF ONE HUNDRED YEARS

IT WAS THE 23RD of June, 1898. The day in Cairo had been unusually hot and oppressive, but as the sun went down, a cool wind from the north came blowing softly over the city.

I was then living in a little corner of the old town still wholly untouched by the ruthless hand of the “reform” that, in every other part, was busy marring with modern “improvements” the old-time charm of the “City of the Caliphs.”

As midnight approached, I went up on the roof to enjoy the cool freshness and quiet of the night, and the stillness was almost unbroken. Now and then in the narrow lanes below, the watchmen, who in their drab-coloured coats and with long staffs and lanterns in their hands, made one think of Old London and the days of Dogberry, called to one another or challenged some belated passer-by, and at times a murmuring echo told of the restless traffic and turbulent life yet stirring in the carriage-crowded streets of the European quarters of the town, but otherwise the silence was undisturbed.

As I stood there, leaning on the parapet of the roof, my thoughts wandered back to the night, just one hundred years before, the 23rd of June, 1798, when possibly some wakeful citizen had stood, perhaps on the very spot on which I was then standing, and gazed upon the very scene, the same limited range of housetops and sidewalls, that was around me. That distant night is one of which the historians of the country make no mention, and yet it is one most worthy of note, as having been at once one of the most peaceful and one of the most memorable Cairo has ever known. Peaceful, for, when not lured from his slumbers by one of the night-quenching festivals he so dearly loves, the Cairene is an early and a sound sleeper, and being then, as now, blessed with an easy-going conscience and unbounded faith in the beneficence of Destiny, we may be certain that on that night he slept the sleep of the just man who is weary. Nor was that night less memorable than peaceful, for little as he could foresee it, it was the last for over a century of time on which the Cairene was to sleep so free from care or thought of the morrow. For, while the city slumbered, away in the villages on the banks of the Nile, sleepers were being unwontedly awakened and dismayed by the sounds of horsemen hurrying through the night with the rushing haste of men who are bearers of tidings of life and death.

Onward, onward they came, these messengers of the night, weary with their long forced ride from Alexandria, the city of the sea, which they had left the day before. Onward, onward as rapidly as they could press forward the steeds that, as one after another failed, were replaced by others seized from the nearest stables “for the service of the State.” Onward and onward on their trying ride, spreading as they went the news they bore, news that murdered the sleep of those who heard it, and flung a pall of panic fear over the land.

They were still on the road when the Cairenes rising, as all good Mahomedans should, with the first dawn of day, proceeded to the duties of the morning with the leisurely diligence that is one of their characteristics. But long before mid-day the messengers had discharged their task, and the fateful news they had brought was being discussed throughout the town. It was news that, to the Cairene, was fraught with most direful possibilities, for it was news that a fleet of English ships of war had arrived at Alexandria, and that the Governor of the town, feeling utterly incapable with the scanty resources at his disposal, of offering any effective resistance to a hostile landing, had sent to beg for immediate assistance in men and munitions of war. Many and fervent were the prayers said in the mosques that day, and loud and deep were the anathemas launched against the foreigner who was at their gates. It is not surprising that it should be so, for, of all evils he could imagine, a foreign invasion was, to the Cairene, as to the people of Egypt generally, the one most suggestive of personal loss and misery.

Exactly one hundred years had passed since that day, and the dying hours of that century of time left the Egyptian, as its opening hours had found him, distrustful of the English, rejecting their friendship, and cursing them as foes. That it should have been thus, is one of the problems that perplex those who attempt to know or understand the Egyptian, and as I thought of these things, it seemed to me that living as I then was amongst the most conservative class of the people, the class that still prides itself on living the life its fathers and grandfathers led, and holds all things foreign to be abominations, and yet meeting from day to day with the modern half-Europeanised citizens, and being myself almost an Oriental in thought and sympathy, I could read the story of that one hundred years and comprehend the feelings of the people through all its incidents, better perhaps than any other European, and that by sketching the history of that century as it appears to me, I might help others to understand the people and their history better, and thus aid in promoting the mutual goodwill that is as essential to the interests of the Egyptian himself, as to those of the great army of foreigners who are dwellers in his hospitable land.

As told by the writers of to-day, the history of Egypt extends over nearly seven thousand years—three score and ten centuries—just one for every year allotted by the Psalmist to man as the period of his life. But of all that great stretch of time the hundred and odd years lying between the fateful 23rd of June in 1798 and the present day, although unfortunately the materials available for a study of it are scant and for the most part unreliable, has more of human interest as a chapter in the history of mankind, than all the long ages that preceded it.

Yet if the reader would rightly comprehend the lesson of this period, he must grasp the fact that in a very full and ample sense all history is a part of one—nay, is but one and the same story writ in different characters. How utterly unlike in all externals are the Gospels written in the Latin, Greek, Arabic, Nagri, or Chinese characters and languages, but the essence and the spirit of all these versions are the same. So it is with the histories of men and nations. The stories of England, France, Spain, India, Egypt, how different! and yet in all that is the final essential of true history—the story of man’s combat with his surroundings—the same. It is so because in the last analysis all men are the same, like the ocean, “His Sea in no showing the same—his Sea and the same ‘neath all showing.”

Scattered in the deserts of Persia, the traveller comes upon isolated villages wherein men and women are born, grow up, marry, beget families, and die, and never once pass beyond the mirage-haunted horizon of their little oasis. With world-encircling ideas and ambitions, the traveller thinks of the mad maelstrom of life in the crowded cities of the West, and wonders that men can be so different and still be men, and yet more so, that between himself and these Persians of the desert, drifting through life in a daily round that never changes, never varies, there should be anything in common. And the wonder is, not that they have the same shape and form as he, that they can cry with Shylock, “If you prick us, do we not bleed? If you poison us, do we not die?” All that is as nothing, since it lifts the man no higher than the brutes of the field, but in all else, in all that is the essential differentia of man, even in these, these children of the waste are such as we, moved by the same passions, stirred by the same affections, urged by the same desires, however variously all these may find expression.

Further yet afield. The miserable Mahars and Mangs of the Indian Deccan, who, living or dead, are held by all the peoples around them as not less vile than the carrion they do not scorn to eat. Even there among these if you will, you may trace, as the venerable missionary Wilson did, deep buried under the man-debasing foulness of their lives, the humanity of the man as the dominating, all-controlling element, severing them by an immeasurable and impassable distance from the noblest of the animals, and linking them by an inseverable bond to the noblest of their fellow-men. All that may characterise the individual outside of this is but the accident of his life and being; the essential element, guiding and swaying him in all things, is this fundamental, ineradicable humanity.

It is the fashion nowadays to speak of the “Brotherhood of man,” but how few realise how absolutely, how completely the phrase expresses the simple truth! a truth that nullifies all the arrogantly-arrayed arguments and fancy-founded fallacies of Haeckel and the whole field of Monists and Materialists. If, then, we would understand the Egyptian or any other people, we must start by recognising that, however wide and apparently unbridgable may be the gulf that divides us from them, whether physical, mental, or moral, it has been caused by the rushing flow of the multitudinous circumstances that have moulded the life and character of each, and, as Mill and Buckle have said, not to any originating difference in our natures.

As a boy at school to me history was the dullest of dull tasks, but when I came to mix with the peoples of foreign lands, and, fascinated by the charm of the living kaleidoscope of Indian life, sought some clue to the myriad-minded moods and manners of its peoples, I longed for a history that should tell me how and why these peoples were so different from, and yet so...