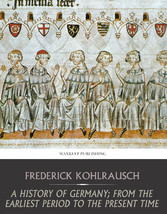 A History of Germany; from the Earliest Period to the Present Time

A History of Germany; from the Earliest Period to the Present Time

THE ROMAN AND GREEK WRITERS who give information upon this period of our history, have already been mentioned at the commencement of the Introduction. In addition to those, we may include here the subsequent chronicles of Prosper and his continuators, Marius especially, Idacius and Marcellinus, which are collected together by Roncallius, in his “Vetustiora Latinorum Chronica,” 2 vols. Further, is to be named Beda Venerabilis, a very learned English monk, who died in the year 735, and who has left behind him a chronicle, “De Sex Ætatibus Mundi,” to 726, and a “Hist. Eccles. Gentis Anglicanæ.” Finally, we have likewise collected largely, for this earlier epoch, from Jordanis, who will be referred to in the second period.

Efforts have been made to trace back the signs of migrations and contests of German tribes on Roman and Greek ground to very early times, and especially to the invasion of the Gauls under Brennus into Italy in the year 389 b. c., and the incursion of the Gauls again, under a second Brennus, through Thracia and Macedonia, as far as Delphi, in the year 278, as referring to German tribes from the vicinity of the Alps. But these indications are much too obscure and fragmentary, and to pursue the inquiry would produce no essential contribution towards a knowledge of our national records. We shall therefore commence the running thread of our history, after, as before, with the incursion of the Cimbri and Teutoni.

It was in the year 113 b.c. that a wild and unknown tribe crossed the Danube, and appeared upon the Alps, where the Romans guarded the passes into Italy. In this same year they defeated the Roman consul Papirius Carbo, who commanded the army here, near Noreja, in the mountains of the present Styria. Carbo had proved treacherous to them, for upon their request to remain on friendly terms with him, he had provided them with false guides, who led them astray among the mountains, whilst he advanced by a shorter road and fell unexpectedly upon them. For this breach of faith they punished him severely, and he and all his troops would have been utterly destroyed had not a heavy storm intervened and assisted his flight.

No one knew whence these fearful hordes originally came; they called themselves, according to the account of the Romans, Cimbri and Teutoni. Upon collecting together the isolated narratives of writers, it appears that the Cimbri had already, for a length of time, been wandering about, and had fought with many nations, especially with the Boi, and now, quitting the Danube, appeared upon the Roman frontiers. Whether they are to be considered as collective tribes intent upon migrating, or only as troops of warriors seeking adventures (as was subsequently the practice of the Suevic warriors under Ariovistus), or, forming themselves by degrees into one entire mass by the junction of women and children, they required a country wherein to settle, we cannot, owing to the deficiency of precise information, positively decide. If the Cimbri, as is the general opinion, proceeded from the Cimbrian peninsula, so called by the Romans, but which now is the present Jutland, it is very certain that only a portion of the tribe could have left it, as it was still occupied by that tribe at a much later period. But if the name Kimber, as others have surmised, implied merely Kämpfer, fighters, (Kamper, Strenuus), they may then have belonged to other German tribes, probably to the Suevi. Opinions likewise differ upon the name of the Teutoni. Some believe it was not the name of an individual tribe, but that the Romans, hearing that these Cimbri were Teuten or Teutones, imagined that they had a second tribe to contend with, which they called Teutoni. According to the opinion of others, the Teutoni were wanderers of several tribes between the Vistula and the Elbe, who, urged forward by the eruption of the Cimbri from their northern peninsula, formed themselves into an individual horde, and called themselves Teuten, or Teutones, the collective name of all the German races. Others fix the home of the Teutoni in the northern Scandinavia, in favour of which their iron armour appears to say much already. But we shall follow the accounts of the ancient writers, who always name the Teutoni as an individual tribe, and remind us that Pytheas had already, more than three hundred years b.c., heard the name of the Teutoni on our northern coasts.

After the Cimbri had fought near Noreja, they advanced through the fruitful district that lies between the Danube and the Alps, towards southern Gaul, which appears originally to have been the aim of their exertions, and many tribes from Germany, Gaul, and Switzerland, strengthened their numbers, particularly the Ambroni from the Emmegau, and the Tigurini (Zürichers), a valiant tribe at the foot of the Alps. They demanded a country from the Romans, for which they promised military assistance for every war. The Romans, however, refused their request, when they determined to obtain by valour and the sword what they could not acquire by treaty. Four Roman armies, one after the other, were defeated and almost annihilated by them and their confederates—the first under the consul Junius Silanus, the second under the consul Cassius Longinus, who fell in the battle, the third under the legate Aurelius Scaurus, who was taken prisoner. When he was brought before the council of the Germans, in order to give them intelligence respecting the passage over the Alps, he advised them to forego their intention, calling the Romans unconquerable. Angered at this, a young German prince, Bojorix, stood forth and struck Scaurus to the ground with his sword.

The Romans, who already thought of conquering the whole earth, but saw themselves now defeated by a horde whose name they scarcely knew, collected together another large army, under the consul Marcus Manlius, and sent it to the assistance of the consul Scipio, whose legate, Scaurus, had just been vanquished. But envy and dissension existed between the generals, and the Germans taking advantage of this, gave such battle to this large army, that 80,000 of the Romans and their allies were left dead upon the field, with 40,000 of their slaves. Manlius fell with his two sons, but Scipio escaped, with, it is said, but ten men. This day was, henceforth, considered by the Romans as one of the most unlucky in their calendar, and the city of Rome, as well as the whole country were seized with such a panic that in Rome for a very long time after, any uncommon alarm was called, a “Cimbrian panic.” The enemy, however, did not take advantage of this opportunity, the reason for which neglect is not known; but, instead of advancing upon Italy, they turned aside towards the south of France and Spain, and gave the Romans time to recover themselves.

The Romans possessed but one man who still sustained their hopes, this was Caius Marius, a rude, proud man, but a valiant warrior. He was of low origin, and had raised himself by his talents alone; he was, therefore, hated by the patricians, but they were obliged, in opposition to all hitherto followed rules and against the laws, to make him consul several years in succession, in order that he might free them from their terrific German foes.

Marius collected his army and conducted it over the Alps towards Gaul, as far as the river Rhodanus (the Rhone), and formed there a defensive camp. He re-established the ancient discipline and order in his army, which had been long neglected, and to which was to be attributed the mischances that had befallen them. He, therefore, kept himself for a long time quiet in his camp, that he might accustom his warriors to the view of the large gigantic forms of these strangers, and to the tone of their fearful voices. And when ever he observed that a small troop of his enemies were alone, he quickly took advantage of the favourable opportunity, and made a sortie upon them with great strength and superiority, that his troops might learn to conquer them by degrees. This delay was irksome to the war-hunting Germans, and they often came to the very walls of the camp, mocked at the Roman army, and called them out to battle, but Marius was not to be diverted from his plan.

The Germans had now divided themselves into two bodies. The Cimbri had passed up the Rhodanus through Switzerland and the Tyrol towards Italy, but the Teutoni remained opposed to Marius. When these latter perceived that their challenge was not accepted by their opponents, they also broke up, marched past his camp on the road to Italy, and called out jeeringly to the Roman soldiers, asking them “if they had any commissions to send to their wives?” The multitude was so great that they were six days passing the camp in uninterrupted ranks.

Marius followed at their side, continuing always upon the heights, that they might not unexpectedly attack him; he then re-encamped himself opposite to them near Aquae Sextiae, or which is the present town of Aix, in the south of France. In the spot he had selected there was but little water, and when his warriors complained of thirst, he pointed with his hand to a river that ran close by the enemy’s camp, and said, “Behold, yonder is drink offered you—but only to be purchased with blood.” They replied,...