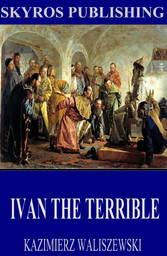 WHEN HE SUCCEEDED TO THE throne, in 1533, Ivan IV.—the Terrible—inherited a territory already extensive, but which, geographically speaking, lacked unity and harmony. The tumult of battle, the confusion of conquest, were apparent everywhere. It was a scene of spoils scattered broadcast. Around the Muscovite nucleus in the centre had been grouped, in constantly broadening eccentric circles, territories which, for the most part, had no resemblance, even, to provinces, and can only be designated by topographical indications : the Governments of Arkhangelsk, Vologda, and Olonetz to the northeast ; those of Novgorod and Pskov to the north-west ; to the west and south-west, the region of the Dnieper, and the present Government of Smolensk, the western portion of the present Government of Kaluga, part of that of Tchernigov, and the western parts of those of Orel and Kursk ; north-east lay the Steppe country, without any definite southern frontier, and for its northern limit the 55th parallel—the northern boundary, in other words, of the present Governments of Kaluga, Tula, Riazan, Tambov, Penza, and Simbirsk ; and, lastly, to the east, the basin of the Kama and its tributaries, the Viatka, the Tshoussova, and the Biela.

A singularity which in itself paints the nature of this settlement is that its most recent and distant conquests, Novgorod and Pskov, with their dependencies, were its most important constituents ; for these included the industrial and commercial regions of the country, and on these, economically speaking, the new Empire subsisted and depended.

Industries were trifling, trade brisker, but still confined to very modest proportions. The population of this land of desolate marsh and moor, living mostly by fishing and only quite exceptionally by husbandry, drew its chief subsistence from a certain flow of merchandise passing to and fro between the Baltic seaboard and the interior of the country. But on an area of 282,127 square versts there were but fourteen towns. Most of these, too, were no more than tiny forts (ostrojki), and in the districts (piatiny) of Biéjets and Olonetz, a huge country covering 171,119 square versts, there were no towns at all; their place was taken by villages (possiélki), with markets and small bazaars.

Up to near the second half of the sixteenth century, Novgorod, with its 5,300 dwelling-houses, was the most important of all the towns in the Empire, save Moscow ; and at Pskov the inventories of the period enumerate 1,300 shops or trading-houses within the town alone, apart from the suburbs. But these documents everywhere point to a phenomenon which looms large in the sixteenth-century history of this particular sphere—the swift extinction of the civilian citizen, properly so called, eliminated by the military element which takes his place. At Gdov, which boasts the largest number of inhabitants belonging to this class, the lists for 1580-1585 only give fourteen ! And this is the work of the Muscovite conquest, which, with its system of general confiscation and its bestowal of the confiscated properties on men of its own choice, has rapidly succeeded in changing the face of the country, even as to its social elements. Now, these newcomers are all warriors, and Moscow, in her invading march, her overflowing expansion, still preserves the primitive characteristic of her first settlement—a military colony in a conquered country.

And it could not be otherwise, for this, like all the other provinces of the new Empire, remains a battlefield, with frontiers ill-defined on one side, and constantly disputed elsewhere. Amongst the fortresses protecting it on the north-west, Smolensk, only conquered in 1514, is still the nominal capital of a Lithuanian-Polish Palatinate, and Viélikié-Louki will soon be snatched by Batory from Ivan IV. North-eastward colonization creeps gradually along the White Sea, from the Onega and the Northern Dvina to the Ural ; but possession is limited along this coast—pomorié, as it is called—to the seashore and the river-banks, and even from the economic point of view, monasteries—strategically-occupied points more than pious foundations—take first rank here. That of Solovki, on the White Sea, possesses, with valuable salt-works and fisheries, a police force and a little army of its own. Further on, east of the Dvina, the conquest is barely outlined : the only rallying-point of the poor fishing population is a half-yearly fair at Lampojnia, on the Mezen, and, the Mezen once crossed, there is a desert country.

A further singularity is that Moscow, girdled by a ring of fortified posts, remained an open town, with all the appearances of a temporary settlement. The city proper, indeed—the Kreml —was surrounded by battlemented walls studded with towers. But this enclosure, which included the Sovereign’s palace, some boïars’ houses, a few churches and monasteries, did not in any sense encircle the life of the capital. The town, with its wooden dwelling-houses, its shops, its markets, its gostinnyï dvor, a stone-built bazaar on the Levantine model, and all its busy trade, escaped outwards in huge suburbs, some open, some protected by mere wooden palisades, and all stretching out into the country, till its meadows and tilled fields mingled with the houses and shops. Industrial life was scattered still further afield, in spacious slobodas, perfect villages, which neighboured it, still amongst fields and woods and gardens, with more monasteries, whose white enclosures and gilded church domes carried the landscape, half urban, half rustic, far out to the horizon. And a fitting capital it was for this Empire on its outward march, moving to a future that still lay obscure, hidden in a perpetual beyond.

The designations of the hastily-formed provinces of the new Empire corresponded with the migratory nature of their constitution. Men said ‘ The towns beyond the Oka,’ ‘ beyond the Kama,’ the word town (gorod) meaning, to them, the territory with its chief town. For the central region itself, the nucleus of the Empire in process of formation, the expression was ‘ The towns beyond the Moskva, zamoskovnyié gorody.’ Nijni-Novgorod, recently conquered.by the rulers of Moscow from another group of the descendants of Monomachus, was sometimes looked on as belonging to this central region, and sometimes relegated, with Arzamas and Mourom, to the outer zone. And yet here the Russia of the North-West, just beginning her new life, possessed another Kiev, as it were, on the very marches of the annexed territories. The situation, the beauty of the site, were both the same. Jenkinson, the Englishman, starting thence, in 1558, with his flotilla of galleys, for the Far East, was to see a renewal of the period of the floating caravans despatched by the Princes of Kiev on the ‘ Voyage to Greece.’ But all around, even to the neighbouring river basin of the Kliazma, save for Vladimir, where some remnants of vanished splendours still remained, the conquest had laid the country waste and scattered it with ruins. The population in the country parts still clung to the soil. In the towns no one was left, save the soldiers, who were everywhere. This is the general hall-mark of the new settlement. The populated centres of the province of Moscow, beyond a radius of some 60 to 100 miles, themselves bore this mark. Northward, at the distance thus indicated, stretched an essentially military zone, wherein military considerations were constantly mingled with peaceful occupations, and the urban districts—Tver, Rjev, Zoubstov, Staritsa—were all strategic points. Southward, the towns of Serpoukhov, Kashira, and Kolomna, on the Upper Moskva, and the Oka, guarded the passage of the two rivers against an ever-threatening invasion. Beyond these lay another desert, the dikoië pole (wild field), not to be colonized till in the second half of the century.

Such was the territory to which the rule of Ivan IV. was to annex, with Kazan, Astrakan, and their dependencies, the low-lying lands along the Middle and Lower Volga, the Kama, the Viatka, and the Caspian seaboard, and to which, as a field for future hope, was to be added, from the banks of the Volga to those of the Don, the Northern Doniêts, and the Lower Dnieper, the enigmatic sphere of the Kozatchina, that huge reservoir into which, from the furthest depths of Poland and Muscovy alike, a whole population of willing exiles perpetually flowed ; upon which, from either side, the same action of laws, political and social, poured forth, in one continuous stream, the same quota of diverse elements, driven out of their natural centres by those three eternal instruments of the formation and disaggregation of societies—the spirit of revolt, the spirit of enterprise, and the spirit of liberty.

As to the total numbers of the population within these borders we have no clue, not even approximate. Touching the capital itself, information varies to an extent which defies all certainty. The number of houses set down for the year 1520—41,500—would give us a population of at least 100,000 souls. But thirty years later the Pope’s Envoy, Possevino, gives 30,000 as a more likely number. True it is, indeed, that the town, during the interval, had undergone a Tartar invasion which had laid it in utter ruin. But the same thing is true of most of the towns of this Empire, in which war still raged almost everywhere, and, between any two given periods —often in the space of a...