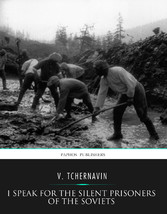 I Speak for the Silent Prisoners of the Soviets

I Speak for the Silent Prisoners of the Soviets

FISHERIES IN THE FAR NORTH

AND NOW, BEFORE I GO on to tell what happened after this strange midnight search and the arrest of my two friends, Scherbakoff and Krotoff, in Murmansk, let me explain as simply as I can how both I and those working with me came to be stationed in such a remote outpost of civilization, and how that very work to which we were giving our conscientious and untiring efforts ultimately, though for no fault of our own, was to bring only misery and distress to ourselves and to our families.

Technically and according to the many questionnaires which I had to fill in during my life in the U.S.S.R. I belong to the nobility. To the Soviet Government this means that I am a class enemy, but, as is often the case among the Russian nobility, neither my parents nor I possessed any money or property which we had not acquired by our own honest efforts and work. I was fifteen years old when my father died. I had an elder sister and four younger brothers, the youngest a child of three. A life of hardship and uncertainty lay ahead of us.

As a boy I succeeded in joining the expedition of the well-known explorer of Altai and Mongolia, V. V. Sapojnikoff, in the capacity of collector-zoologist. With him I first saw nature in the wild, often visiting places not yet shown on maps; one summer we travelled through roadless territory for more than 2,000 kilometers on horseback. This was the beginning of my work of exploration, which I later carried on independently. For a while I acted as a zoologist for such expeditions and then became the leader in a series of scientific expeditions to the Altai and Sayanskii Mountains, to Mongolia, to the Tian-Shan Mountains, the Amur, the Ussurisk region on the Siberian-Manchurian border and to Lapland.

I believed that regular study was unnecessary and that I could succeed without it. Already earning my living at an early age, I was engaged in various activities such as preparing scientific materials and drawing anatomic charts. The necessity of earning more money gave me the thought of studying ichthyology—the science of fish—a subject which I felt had a wide practical application. I, therefore, undertook to get a knowledge of the sea and became proficient in the use of oars and sails. But I finally realized that the specialized work in which I wished to be engaged demanded a technical training and so I entered the university. The War interrupted my studies there and when I returned again to private life I was crippled. At first it seemed as though I should never regain my health, but within a year I was able to discard my crutches and, although still lame, go on a scientific expedition to the Amur.

Later I did receive a university diploma and was offered a steady position, but it was not long before the Revolution broke the normal course of my life and the institution where I worked was closed by the Bolsheviks. But I lost nothing in the Revolution, for like many others I had nothing to lose.

During the general disorganization which followed this upheaval in Russia, when hunger and cold had to be combatted not only for myself, but also for my wife and for the third and newest member of our family who required warmth and milk, I obtained several jobs, each of which in the “capitalistic” world would have been considered of high standing and would have enabled my family to live in comfort. But in the U.S.S.R. the only job that was allowing me a reasonable income was a course I was giving at the Agricultural Institute. This particular work I had sought out because it entitled me to a bottle of milk a day and sometimes a few beets and a little oats and mash which the professors of the Institute were allowed to have from the rations of the cattle which belonged to it.

In spite of the hunger and cold, I succeeded during that winter in finishing my thesis and receiving a degree. And my scholastic work having thus been terminated, I agreed to take part in an expedition to Lapland, an expedition organized by the “wealthy” Supreme Council of People’s Economy. Before starting I tried to get one poud (36 lbs.) of salt instead of the million paper roubles which were due me for the three months that the expedition was to last. This salt would have served my family as a means of exchange in the villages for potatoes and milk. My request was rejected and I was told that salt in such a “large quantity” was not available, but I nevertheless went on the expedition because it interested me.

The journey to our destination, a distance of 1,100 kilometers, was made in freezing weather in an unheated box car packed full of people and baggage and took fourteen days. Death among passengers in such cars was a usual occurrence. The conditions of our expedition were most difficult, but we still went on with our work with as much zeal and energy as we had given before the Revolution when we were never subjected to such trying situations. There was every reason why the Bolsheviks should have become convinced that the Russian intellectuals were working conscientiously and honestly. New discoveries of great importance and about which the Bolsheviks boast continually were made by Russian scientists under the most difficult conditions, but during the actual work of research not one of the Communist “party” men ever helped; they came forward only when and where it promised to be of advantage to their career.

When in 1921 Lenin declared a respite—the NEP (New Economic Policy)—life changed with fantastic rapidity. The country began to prosper. Food and clothing became more available. One could then buy wood for fuel as well as for repairing. Electric light service was resumed as well as street car and taxi services. Life was returning to the “bourgeois” aspect under the leadership of the Bolsheviks themselves. They came out with a new motto: “A Communist must be an industrialist and a trader.”

What did the intellectuals and scientists gain in this change? Their general living conditions improved, but as compared to the advance in the standard of living of other classes of the population they were left far behind. The campaign of economy affected first and hardest all scientific and educational institutions. The funds appropriated for them were so miserly that any typist in a commercial and industrial enterprise was receiving more pay than professors and scientific experts. At the same time, due to continually advancing prices for rent, street-car and railway transportation and postage, as well as for everyday necessities, life for scientists not connected with any industrial organization was becoming exceedingly hard.

In spite of these material hardships Russian scientists continued to work as before. At this time, however, the Bolsheviks, having gained strength through the NEP, began an active persecution of any theoretical work which, according to their judgment, did not agree with the Marxist theories. I realized that my own scientific and theoretical work was at an end. I felt that I was up against an impassable wall. Life was hard. The career I had chosen for myself from the time of my youth, that career which I had stubbornly and persistently followed, could not go on. I must give up purely scientific work—for a time at least—and turn to something more practical.

Early in 1925, at the time when the NEP was particularly flourishing, I was offered the post of Director of Production and Research Work of the North State Fishing Trust, the State-owned industry which had been set up to deal with the fishing business of the region on the Arctic Ocean. I accepted this offer in the hope that it would give me an opportunity to return to research work. And after a time, indeed, I was able to leave the production side and to organize in Murmansk a scientific biological and technological laboratory.

The North State Fishing Trust’s work was carried on in that part of the Arctic Ocean which is called the Sea of Barents, the shores of which are for the most part Russian territory: the Murman coast of the Kola Peninsula, the Kanin Peninsula and the Lapland coast of the continent. Russian fisheries had existed here since the sixteenth century, but the conditions of life were so hard that only about five hundred families had settled on the Murman coast as colonists, with other fishermen going there only for the Bummer fishing season.

The Murman coast is exceptionally austere, its granite cliffs descending in steep steps and abrupt declines straight into the ocean. There is scarcely any vegetation; only those slopes sheltered from the wind are sparsely covered with grass and a few low-growing polar willows and birches. Elsewhere the only growth is moss and rock creepers. Patches of snow remain on the beach throughout the summer. The ocean, however, never freezes and at temperatures of fifty degrees or more below zero the black water and floating ice are covered by a dense white fog. In winter the sun does not rise above the horizon. The settlements of the “colonists” are hidden from the winds in deep inlets or built like birds’ nests in the cliffs above the level of the tide which sometimes rises to a height of five meters. Some of these dwellings can be reached only by wooden ladders, one end resting on floating boats, the other reaching to the doorstep of the rain and wind-battered huts.

The colonists earned their living by fishing and they, as well as the men who came only for the summer fishing season, used the primitive methods of their ancestors three or four centuries ago—the same deckless, clumsy open...