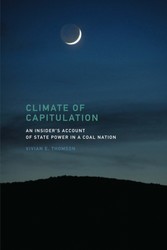 The United States has pledged to the world community a reduction in greenhouse gas emissions by 26--28 percent below 2005 levels in 2025. Because much of this reduction must come from electric utilities, especially coal-fired power plants, coal states will make or break the U.S. commitment to emissions reduction. In Climate of Capitulation, Vivian Thomson offers an insider's account of how power is wielded in environmental policy making at the state level. Thomson, a former member of Virginia's State Air Pollution Control Board, identifies a 'climate of capitulation' in state government -- a deeply rooted favoritism toward coal and electric utilities in states' air pollution policies.Thomson narrates three cases involving coal and air pollution from her time on the Air Board. She illuminates the overt and covert power struggles surrounding air pollution limits for a coal-fired power plant just across the Potomac from Washington, for a controversial new coal-fired electrical generation plant in coal country, and for coal dust pollution from truck traffic in a country hollow. Thomson links Virginia's climate of capitulation with campaign donations that make legislators politically indebted to coal and electric utility interests, a traditionalistic political culture tending to inertia, and a part-time legislature that depended on outside groups for information and bill drafting. Extending her analysis to fifteen other coal-dependent states, Thomson offers policy reforms aimed at mitigating the ingrained biases toward coal and electric utilities in states' air pollution policy making.