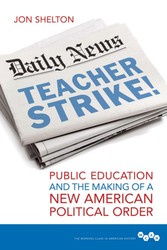 Teacher Strike! - Public Education and the Making of a New American Political Order

Teacher Strike! - Public Education and the Making of a New American Political Order

A wave of teacher strikes in the 1960s and 1970s roiled urban communities. Jon Shelton illuminates how this tumultuous era helped shatter the liberal-labor coalition and opened the door to the neoliberal challenge at the heart of urban education today. Drawing on a wealth of research ranging from school board meetings to TV news reports, Shelton puts readers in the middle of fraught, intense strikes in Newark, St. Louis, and three other cities where these debates and shifting attitudes played out. He also demonstrates how the labor actions contributed to the growing public perception of unions as irrelevant or even detrimental to American prosperity. Foes of the labor movement, meanwhile, tapped into cultural and economic fears to undermine not just teacher unionism but the whole of liberalism.