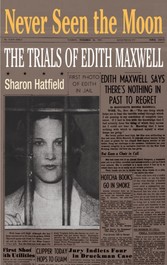 Never Seen the Moon - THE TRIALS OF EDITH MAXWELL

Never Seen the Moon - THE TRIALS OF EDITH MAXWELL

Never Seen the Moon carefully yet lucidly recreates a young woman's wild ride through the American legal system. In 1935, free-spirited young teacher Edith Maxwell and her mother were indicted for murdering Edith's conservative and domineering father, Trigg, late one July night in their Wise County, Virginia, home. Edith claimed her father had tried to whip her for staying out late. She said that she had defended herself by striking back with a high-heeled shoe, thus earning herself the sobriquet &quote,slipper slayer.&quote,Immediately granted celebrity status by the powerful Hearst press, Maxwell was also championed as a martyr by advocates of women's causes. National news magazines and even detective magazines picked up her story, Warner Brothers created a screen version, and Eleanor Roosevelt helped secure her early release from prison. Sharon Hatfield's brilliant telling of this true-crime story transforms a dusty piece of history into a vibrant thriller. Throughout the narrative, she discusses yellow journalism, the inequities of the jury system, class and gender tensions in a developing region, and a woman's right to defend herself from family violence.