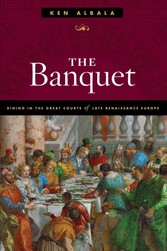 Banquet - Dining in the Great Courts of Late Renaissance Europe

Banquet - Dining in the Great Courts of Late Renaissance Europe

The importance of the banquet in the late Renaissance is impossible to overlook. Banquets showcased a host's wealth and power, provided an occasion for nobles from distant places to gather together, and even served as a form of political propaganda. But what was it really like to cater to the tastes and habits of high society at the banquets of nobles, royalty, and popes? What did they eat and how did they eat it?In The Banquet, Ken Albala covers the transitional period between the heavily spiced and colored cuisine of the Middle Ages and classical French haut cuisine. This development involved increasing use dairy products, a move toward lighter meats such as veal and chicken, increasing identification of national food customs, more sweetness and aromatics, and a refined aesthetic sense, surprisingly in line with the late Renaissance styles found in other arts.