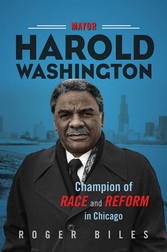 Mayor Harold Washington - Champion of Race and Reform in Chicago

Mayor Harold Washington - Champion of Race and Reform in Chicago

Raised in a political family on Chicago's South Side, Harold Washington made history as the city's first African American mayor. His 1983 electoral triumph, fueled by overwhelming black support, represented victory over the Chicago Machine and business as usual. Yet the racially charged campaign heralded an era of bitter political divisiveness that obstructed his efforts to change city government. Roger Biles's sweeping biography provides a definitive account of Washington and his journey from the state legislature to the mayoralty. Once in City Hall, Washington confronted the back room deals, aldermanic thuggery, open corruption, and palm greasing that fueled the city's autocratic political regime. His alternative: a vision of fairness, transparency, neighborhood empowerment, and balanced economic growth at one with his emergence as a dynamic champion for African American uplift and a crusader for progressive causes. Biles charts the countless infamies of the Council Wars era and Washington's own growth through his winning of a second term-a promise of lasting reform left unfulfilled when the mayor died in 1987. Original and authoritative, Mayor Harold Washington redefines a pivotal era in Chicago's modern history.