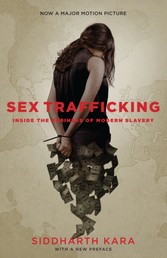 Sex Trafficking - Inside the Business of Modern Slavery

Sex Trafficking - Inside the Business of Modern Slavery

Since the publication of Sex Trafficking in 2007, Siddharth Kara has continued to travel across countries and continents, documenting the local factors and economic forces that support sexual slavery worldwide. His riveting encounters with victims and traffickers informed his screenplay for Trafficked (2016), now a major motion picture. The film features familiar figures from Sex Trafficking and the shocking conditions of their exploitation. It also includes cases Kara has uncovered since his book debuted.This new paperback edition of Sex Trafficking includes a preface by Kara in which he discusses his findings and updates the statistics relating to his business and economic analysis of contemporary slavery. After fifteen years, Kara has recorded nearly 900 cases of sex trafficking in forty-one countries and has helped advise on numerous legal, tactical, and policy efforts for abolishing modern-day slavery across the globe. Sex Trafficking continues to lead as a resource for those hoping to expose this hidden evil and eradicate its practice once and for all.