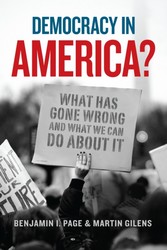 Democracy in America? - What Has Gone Wrong and What We Can Do About It

Democracy in America? - What Has Gone Wrong and What We Can Do About It

America faces daunting problems-stagnant wages, high health care costs, neglected schools, deteriorating public services. Yet the government consistently ignores the needs of its citizens, paying attention instead to donors and organized interests. Real issues are held hostage to demagoguery, partisanship beats practicality, and trust in government withers along with the social safety net.?How did we get here? Through decades of dysfunctional government. In Democracy in America? veteran political observers Benjamin I. Page and Martin Gilens marshal an unprecedented array of evidence to show that while other countries have responded to a rapidly changing economy by helping people who've been left behind, the United States has failed to do so.? Instead, we have actually exacerbated inequality, enriching corporations and the wealthy while leaving ordinary citizens to fend for themselves.?What's the solution? More democracy. More opportunity for citizens to shape what their government does. To repair our democracy, Page and Gilens argue, we must change the way we choose candidates and conduct our elections, reform our governing institutions, and curb the power of money in politics. By doing so, we can reduce polarization and gridlock, address pressing challenges, and enact policies that truly reflect the interests of average Americans.?This book presents a damning indictment. But the situation is far from hopeless. With increased democratic participation as their guide,?Page and Gilens lay out a set of proposals that would boost citizen participation, curb the power of money, and democratize the House and Senate. The only certainty is that inaction is not an option. Now is the time to act to restore and extend American democracy.?