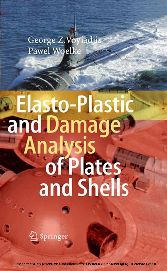 Elasto-Plastic and Damage Analysis of Plates and Shells

Elasto-Plastic and Damage Analysis of Plates and Shells

Shells and plates are critical structures in numerous engineering applications. Analysis and design of these structures is of continuing interest to the scienti c and engineering communities. Accurate and conservative assessments of the maximum load carried by a structure, as well as the equilibrium path in both the elastic and inelastic range, are of paramount importance to the engineer. The elastic behavior of shells has been closely investigated, mostly by means of the nite element method. Inelastic analysis however, especially accounting for damage effects, has received much less attention from researchers. In this book, we present a computational model for nite element, elasto-plastic, and damage analysis of thin and thick shells. Formulation of the model proceeds in several stages. First, we develop a theory for thick spherical shells, providing a set of shell constitutive equations. These equations incorporate the effects of transverse shear deformation, initial curvature, and radial stresses. The proposed shell equations are conveniently used in nite element analysis. 0 AsimpleC quadrilateral, doubly curved shell element is developed. By means of a quasi-conforming technique, shear and membrane locking are prevented. The element stiffness matrix is given explicitly, making the formulation computationally ef cient. We represent the elasto-plastic behavior of thick shells and plates by means of the non-layered model, using an Updated Lagrangian method to describe a small-strain geometric non-linearity. For the treatment of material non-linearities, we adopt an Iliushin's yield function expressed in terms of stress resultants, with isotropic and kinematic hardening rules.